MD Ane Gerda Zahl Eriksson at Institute of Clinical Medicine will be defending the thesis “Sentinel lymph nodes in endometrial carcinoma -Mapping, diagnostic accuracy and oncologic outcome” for the degree of Dr. Philos. 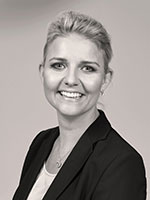 See Trial lecture on a given topic.

Endometrial carcinoma (EC) is the most common cancer of the female genital tract in industrialized countries. It is well accepted that surgical staging of EC should include removing the uterus, tubes and ovaries, but the role and extent of lymph node dissection is highly debated. Sentinel lymph node (SLN) biopsy has emerged as a reasonable approach compared to lymphadenectomy (LND). Although the SLN technique and algorithm have evolved over the past few decades, there remain unanswered questions regarding the role of SLN biopsy in the management of EC.

The main aim of this thesis was to investigate the introduction of indocyanine green (ICG) as a novel dye in the detection of SLNs. To evaluate detection of metastatic nodes and oncologic outcome, comparing an SLN approach to lymphadenectomy, and to investigate treatment patterns and oncologic outcome of patients with low-volume metastasis. The investigations were based on retrospective data from the Memorial Sloan Kettering Cancer Center institutional SLN database in addition to a historic LND cohort from the Mayo Clinic, Minnesota.

Overall, the SLN algorithm is accurate in detection of nodal metastasis in women with early-stage EC, and does not appear to compromise oncologic outcomes within this short follow-up.