Cand.med. Christian Riddervold Kahrs at Institute of Clinical Medicine will be defending the thesis “Celiac disease in two Norwegian prospective birth cohorts: infections and growth in early life” for the degree of PhD (Philosophiae Doctor). 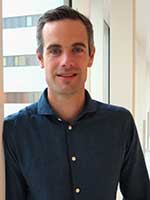 We used data from two cohorts: 1) The Norwegian Mother and Child Cohort study (MoBa), a large-scale population-based pregnancy cohort which recruited pregnant women across Norway between 1999 and 2008: and 2) The MIDIA study, a birth cohort of Norwegian children carrying the HLA high-risk haplotype DQ-2/DQ-8 recruited during 2001-2007 and followed with monthly stool samples from 3 to 36 months and annual blood samples. All children still participating in MIDIA were screened for celiac disease during 2014-2016.

The findings suggest that viral infections early in life may induce celiac disease. However, gluten and predisposing genes are required, and corroboration of the potential role of different types of viruses is warranted.