Cand.med. Åsmund Avdem Fretland at Institute of Clinical Medicine will be defending the thesis “Minor surgery for major disease - a randomized controlled trial of laparoscopic and open liver surgery” for the degree of PhD (Philosophiae Doctor). 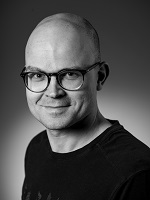 From February 2012 to February 2016, a total of 280 patients from Oslo University Hospital were randomly assigned to laparoscopic (n=133) or open (n=147) liver resection. The primary endpoint demonstrated a significant reduction in morbidity from 31% in the open group to 19% in the laparoscopic group. Hospital stay was shorter after laparoscopy while there was no difference in operation time, resection margins, or costs. Patients in the laparoscopic group reported better postoperative health related quality of life than patients in the open group, and for some aspects this difference lasted up to four months after the operation. In a substudy of the inflammatory response, eight markers of inflammation increased significantly from baseline, and five of these showed significantly lower levels in the laparoscopic group.

The most important future aspect for this field of research is to study cancer recurrence and survival for these two operations, and to study laparoscopic liver surgery in patient groups not included in this trial, including larger liver resections, resections in patients with cirrhosis and in patients with primary liver cancer.