Cand.med. Guri Hagberg at Institute of Clinical Medicine will be defending the thesis "Long term effect of stroke on survival, cognition and amyloid brain pathology - a seven-year follow-up study" for the degree of PhD (Philosophiae Doctor). 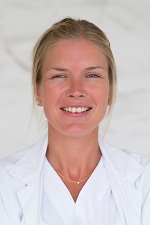 Cognitive impairment (CI) with mixed neurodegenerative and vascular pathologies after
stroke is common, but the changes over time and factors associated with these changes are
not fully understood. Alzheimer`s disease (AD) and stroke share a common set of vascular
risk factors, and guidelines recommend optimal treatment of these risks to prevent
the development of dementia in the general population. Ischemia, amyloid deposition
(a hallmark of AD), and neuroinflammation seem to interact, resulting in overlapping
processes.

In the original Cognition After STroke (CAST) study, 227 patients with first-ever stroke or
transient ischemic attack (TIA), were randomized to a multifactorial risk factor
intervention program, aiming to reduce the incidence of cognitive impairment one-year
post-stroke. We observed no significant effect on cognition, but patients in the intervention
arm had better vascular risk factor control. Survivors from the CAST study were invite to a
seven-year follow-up study, and we hypothesized that a multifactorial intervention could
lead to better survival after stroke and that patients with CI of vascular origin could
remain cognitively stable during follow-up due to preventable pathology. We also
hypothesized that patients diagnosed with CI after seven years would have developed
brain amyloid deposition as a sign of AD.

We did not find a significant effect on survival at seven years of a multifactorial vascular risk
factor program given during the first-year post-stroke, and in our cohort of stroke survivors,
higher BMI was an independent predictor for long-term survival. Lower medial temporal
lobe atrophy grade on MRI at one year and lower age were associated with a favorable
cognitive outcome at seven years. Amyloid deposition was not common in our cohort of
stroke survivors diagnosed with CI.