Cand.med. Ane-Victoria Idland at Institute of Clinical Medicine will be defending the thesis Alzheimer's disease-associated biomarkers in delirium and cognitively normal older adults for the degree of PhD (Philosophiae Doctor). 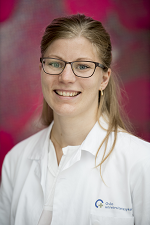 Click here to participate in the digital public defence

Higher age comes with a multitude of brain changes, and brain changes can precede cognitive symptoms by many years. Cognitively normal older adults show biomarker evidence of Alzheimer’s disease (AD) pathologies, yet the implications of these changes are not established. Older age and dementia are risk factors for delirium, a condition characterized by acute disturbance of attention, awareness, and cognition, but the pathophysiological relationship between delirium and dementia is not understood.
The aim of the thesis was to increase our knowledge about the role of different neuropathological processes in delirium and cognitively normal older adults using AD-associated cerebrospinal fluid biomarkers of amyloid pathology (Aβ42), tauopathy (P-tau), neurodegeneration (T-tau, NFL, FABP3) and neuroinflammation (YKL-40).

In cognitively normal older adults, high levels of NFL predicted higher hippocampal atrophy, also in subgroups unlikely to have AD, suggesting that NFL is a biomarker of AD-independent neurodegeneration in aging. A data-driven grouping, based on 6 AD-associated biomarkers, identified subgroups of cognitively normal older adults with different biomarker profiles, including a subgroup with high levels of biomarkers of tauopathy and neurodegeneration (T-tau, P-tau, FABP3). This group showed more memory decline over 7 years compared to the group with most normal biomarker levels. The result suggests that a high degree of neurodegeneration and tauopathy is associated with greater memory decline. The data-driven grouping improved prediction of memory decline compared to an established classification based on Aβ42 and P-tau. In hip fracture patients without dementia, delirium was associated with more pathological levels of AD biomarkers (Aβ42, T-tau, Aβ42/P-tau), suggesting a pathophysiological link between AD and delirium and that delirium may be a sign of preclinical AD.

In sum, the thesis suggests that AD-associated brain changes in persons without dementia are associated with delirium, hippocampal atrophy, and memory decline.