M.Sc Pinelopi Kroustallaki at Institute of Clinical Medicine will be defending the thesis “Functions of SMUG1 and NEIL3 in telomere homeostasis” for the degree of PhD (Philosophiae Doctor). 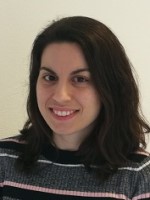 Telomeres are nucleoprotein structures located at the end of chromosomes. Telomere length and the enzyme responsible for their elongation, telomerase, are essential for genome integrity by protecting chromosomal ends. Telomeric homeostasis is important in human aging and cancer and its dysfunctions is related to several diseases, from premature aging syndromes to atherosclerosis. Several factors affect telomeres, such as lifestyle, genetics, environmental agents and oxidative stress. Cells have developed mechanism to cope with DNA damage induced at telomeres e.g. by oxidative stress. One of these mechanisms is Base Excision Repair (BER). Several DNA glycosylases acting in the BER pathway have telomeric DNA as substrates. The current study was focused on the possible roles of the SMUG1 and NEIL3 DNA-glycosylases in telomeric homeostasis in human cells and mice.

This work unveils a new role of SMUG1 in the processing of the telomerase RNA component. We show that in human cells, SMUG1, via modifying bases in the hTERC sequence, ensures proper telomerase assembly. In mice, however, SMUG1 seems to predominantly function as a canonical BER DNA-glycosylase. Smug1-/- mice present tissue specific telomere defects suggesting a connection of the SMUG1 role in telomeric DNA, with senescence driven tissue aging phenotypes. A focal point of this study was also the NEIL3 DNA-glycosylase and how its function on telomeres is associated with atherosclerosis. We show that NEIL3 deficient mice present telomere erosion, which is believed to be a consequence of the overall NEIL3 deficiency as a DNA repair protein.

Overall, this data support an important role of DNA glycosylase in telomere homeostasis, by either facilitating telomerase biogenesis or by functioning as canonical BER DNA-glycosylases.