Cand.med Ola Nakken at Institute of Clinical Medicine will be defending the thesis “Epidemiology of Amyotrophic Lateral Sclerosis: A population-based study in Norway” for the degree of PhD (Philosophiae Doctor). 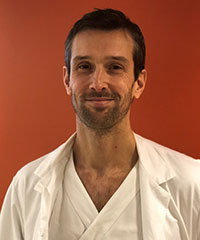 The aim of this thesis was first to describe ALS mortality and prevalence. We validated data from the Norwegian Cause of Death Registry as well as diagnoses given at hospitals. For prevalence, we combined data from the Norwegian Patient Registry, the Norwegian Prescription Database and the Norwegian Cause of Death Registry. Next, we aimed to investigate the temporal relationship between prediagnostic body mass index (BMI), weight change and ALS risk. We designed a cohort study by combining data from a large, near nation-wide tuberculosis mass screening with later health surveys and current compulsory registers.

The death registry was a valid source for detecting ALS deaths, with mortality serving as a good proxy for incidence. ALS mortality increased steadily from 1951 to 2014 when it was 2.7/100,000 person years. An age-period-cohort analysis suggested influences from both improvement in case ascertainment and differential impact from environmental factors across birth cohorts.

Prevalence ranged from 6.9 to 7.7/100,000 population between 2009 and 2015. Comparing prevalence to mortality data suggested differences in survival after diagnosis across genders and regions.

Our cohort study comprised nearly 1.5 million citizens, with nearly 3000 ALS cases and up to 54 years of follow up. High BMI and weight gain were associated with low ALS risk several decades later. Overall, hazard ratio for ALS per 5-unit increase in prediagnostic BMI was 0.83 (95% confidence interval 0.79–0.88).

Taken together, these studies show that existing Norwegian health registers and databases can work as valid sources for ALS disease surveillance, and can detect both trends in disease rates and possible risk factors.