Cand.med. Siri Kristine Lynne Rydning at Institute of Clinical Medicine will be defending the thesis Novel causes and refined phenotypes of hereditary spastic paraparesis. Studies of subgroups of hereditary spinocerebellar disorders in a Norwegian cohort for the degree of PhD (Philosophiae Doctor). 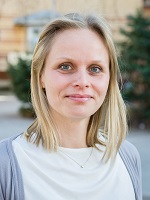 The digital defence will follow regular procedure as far as possible, hence it will be open to the public and the audience can ask ex auditorio questions when invited to do so.

Hereditary spastic paraparesis (HSP) comprise a group of monogenic neurodegenerative disorders, characterized by progressive gait difficulties due to increased muscle tone in the legs, with or without additional clinical features. Management is symptomatic, as there are no curative or disease-modifying treatment. Variants in >60 genes may cause the disorder. However, many patients remain without a specific genetic diagnosis and descriptions of the clinical features and disease mechanisms in the rarer forms of HSP are sparse, making personalized treatment difficult.

Siri Lynne Rydning and colleagues aimed to characterize subgroups of HSP both clinically and molecularly. The patients were selected from a Norwegian cohort comprising more than 600 individuals with hereditary progressive gait disturbances, and whole-exome sequencing was the main genetic method. This resulted in novel molecular causes and refined phenotypes of four genetic forms:

•    SPG7: SPG7 was the most common autosomal recessive form of HSP in this material, partly due to a Norwegian founder mutation.

•    SPG79: The study describes the second family in the world with complex HSP caused by biallelic variants in the UCHL1 gene. The patients shared a unique combination of variants, possibly protecting cognitive function.

•    HSP-ERLIN2: For the first time, a heterozygous variant in the ERLIN2 gene causing a pure form of HSP was identified, thereby establishing a novel mode of inheritance for variants in this gene.

•    ATX/HSP-POLR3A: Biallelic variants in the POLR3A gene was identified as a novel and frequent cause of disease in our cohort, causing a recognizable clinical phenotype and underlining the role of intronic variants in disease.

In addition to improved diagnostics and follow-up for these patients, the results have led to increased insight into neuronal biology and pathology, which provide a foundation for future research towards novel treatment.