Cand.med Johan Edvard Steineger at Institute of Clinical Medicine will be defending the thesis “Intranasal bevacizumab in treating hereditary hemorrhagic telangiectasia associated epistaxis. Long-term effectiveness and a novel correlation of Pentraxin 3 with epistaxis severity” for the degree of PhD (Philosophiae Doctor). 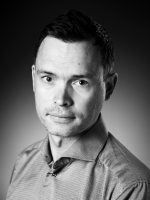 Hereditary hemorrhagic telangiectasia (HHT) is a rare, genetic disorder that causes abnormal blood vessel development (angiogenesis) in the mucous membranes, skin and internal organs. HHT leads to recurrent episodes of nasal bleeding (epistaxis) which can be very stressful, with a significant negative impact on the quality of life of affected individuals. There is currently no cure, so the treatment is supportive and preventive. Since the severity of epistaxis varies widely from patient to patient, treatment must be individually tailored. Numerous treatment options are available, all with associated side effects and limitations. Thus, the development of new treatment methods is constantly indicated.

Bevacizumab is a relatively new and exciting therapeutic alternative in HHT and works by inhibiting angiogenesis. It works by binding the pro-angiogenic molecule Vascular Endothelial Growth Factor (VEGF). When bevacizumab is injected in the mucous membrane inside the nose, it can reduce the severity of epistaxis in many patients with HHT, and the side effects are believed to be minimal. However, previous studies on this treatment have short observation periods and very few included patients. We suspected that some patients would have a gradual loss of treatment response over time. Accordingly, we examined the efficacy of intranasal bevacizumab injections during a 6-year period in a cohort of 33 patients, prospectively. Efficacy measures were the severity of epistaxis, measured with specific grading systems, and quality of life measured with validated questionnaires. In addition, any adverse events to the treatment were recorded.

During the observation period, it became clear that the treatment response was individual. Most of the patients had very good response; some gradually lost the effect, while a minority had no response. Thus, it became important for us to investigate whether it was possible to predict which patients would benefit from bevacizumab injections. Accordingly, we investigated whether VEGF and other related angiogenic factors in serum in HHT patients correlated with the severity of epistaxis. The level of these factors was also measured in healthy control subjects. We observed that one of the factors, Pentraxin 3, was significantly correlated with the severity of epistaxis and elevated in patients with HHT compared to healthy controls. Pentraxin 3 could potentially serve as a biomarker for HHT associated epistaxis severity in the future.