Msc Mari Aksnes at Institute of Clinical Medicine will be defending the thesis “Amyloidogenic nanoplaques as a potential biomarker for Alzheimer’s disease” for the degree of PhD (Philosophiae Doctor). 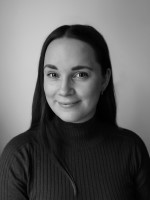 Dementia is the decline of cognitive functions such as memory to an extent that limits a person’s ability to perform daily tasks such as paying bills. The most common cause of dementia is Alzheimer’s disease, a progressive neurodegenerative disorder. However, Alzheimer’s disease begins in the brain several years before we see the first signs of dementia. By studying biomarkers of Alzheimer’s disease such as changes in the brain, the cerebrospinal fluid or blood, we hope to achieve earlier diagnosis, earlier intervention and eventually a cure. The aim of Mari Aksnes’ thesis was to test the use of small amyloidogenic aggregates, called nanoplaques, as biomarkers for Alzheimer’s disease. Aksnes and colleagues used a novel method, the Thioflavin-T Fluorescence Correlation Spectroscopy (ThT-FCS) assay, to measure nanoplaques in cerebrospinal fluid and blood serum of patients assessed at the Memory Clinic at Oslo University Hospital.