Cand.med Svein Oskar Frigstad at Institute of Clinical Medicine will be defending the thesis “Vitamin D deficiency in Inflammatory Bowel Disease – prevalence, predictors and associations with fatigue and pain (The Vitality Study)” for the degree of PhD (Philosophiae Doctor). 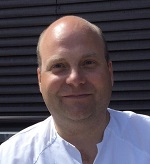 Inflammatory bowel disease (IBD) consists mainly of Crohn’s disease and ulcerative colitis, which are chronic inflammatory disorders of the gastrointestinal tract. Patients report a variety of symptoms such as diarrhea with or without blood, abdominal pain, weight loss and fatigue.

The goal of this thesis was to investigate the prevalence and possible clinical predictors of Vitamin D deficiency in IBD, and whether a deficiency might be associated with patient reported outcomes such as increased fatigue and pain severity.

The role of vitamin D in IBD remains controversial, but our study supports the importance of ensuring at least adequate vitamin D levels in patients with IBD. An unmet need remains, in establishing whether the potential anti-inflammatory effects of vitamin D translates into clinical benefits for patients.