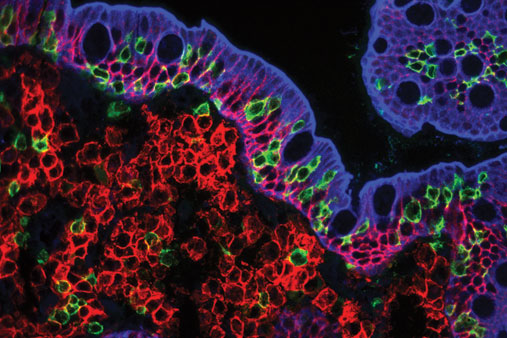 Between 1% and 2% of Norwegians have coeliac disease. This is a partly hereditary disease that may place considerable strain on patients and their families. If you develop the disease, you have to change your diet and live with the disease for the rest of your life.

Diseases where the immune system reacts to the body itself are called autoimmune diseases. Coeliac disease may give rise to many different afflictions such as stomach pain, lethargy and poor nutrient absorption.

Given the right changes in diet, it is possible to live without symptoms. Changing one's diet sufficiently is not easy, however, because so much of the food we eat in Norway contains gluten.

Found the key to coeliac disease

Professor Ludvig M. Sollid and his colleagues have found the cause of this disease. To do so required really going into depth, right down to molecular level.
Professor Sollid explains:

"Human leucocyte antigens (HLAs) are found as genetically determined variants in all humans. The task of HLAs is to bind to fragments of proteins that are broken down in the cells, transport the fragments to the cell surface and present them to the T-lymphocytes.

The T-lymphocytes, or T-cells, are a particular type of white blood corpuscle that is important to the immune system. The T-cells monitor cells for viral or bacterial infections. They detect infections by finding remnants of viruses or bacteria as fragments bound to HLAs. If any are detected, the immune system will ensure that the infected cell is killed.

The T-cells of people with coeliac disease think gluten is a virus or bacterium, and therefore cause an immune reaction that we experience as an infection, with associated discomfort", says Sollid.

The genes that code for HLAs were mapped in the 1980s. Researchers now knew where in the genome they should look. It was also clear already that certain types of HLA were more prevalent in persons with coeliac disease.

"We discovered that there were two types of HLA (HLA-DQ2 and HLA-DQ8) which predispose a person for coeliac disease", explains Professor Sollid.

Further research revealed that the two HLA types present gluten remnants to the T-cells. The T-cells therefore believe that gluten is dangerous, and they initiate immune reactions that cause an inflammation reaction in the intestines.

This is what causes coeliac disease.

"We also found that the bits of gluten that were presented to the T-cells have some changes caused by an enzyme in the body – transglutaminase 2", says Sollid.

Just before Sollid's group made this discovery, some German scientists had found that coeliac patients have antibodies for precisely this enzyme. This is hardly pure coincidence.

At present, Professor Sollid and his group are investigating how antibodies against transglutaminase are formed.

Provides insight into other diseases

"The disease develops because the immune system reacts to gluten, which is an alien substance. At the same time, the immune system launches a reaction against the body itself by creating antibodies to transglutaminase.

It is possible that this type of reaction to alien substances may also be involved in other autoimmune diseases. It may be a particular virus or a particular bacterium. We just don't know what it is in the different diseases.

This has given researchers all over the world an entirely new approach to understanding these disorders", says Professor Sollid. "We still do not know the exact cause of autoimmune diseases like arthritis and multiple sclerosis".

"Our research has also given us the opportunity to design diagnostic tests that look very promising. The tests will be far more precise, because we will be using antibodies created from the patient's cells as part of the tests", explains Sollid.

Professor Ludvig M. Sollid's group was recently granted resources from UiO earmarked for developing world-leading research communities. The funding was granted over the central government budget, and Professor Sollid's team was selected as one of five research groups to receive such funding.

"The faculty is extremely proud to have a research team among the world elite".