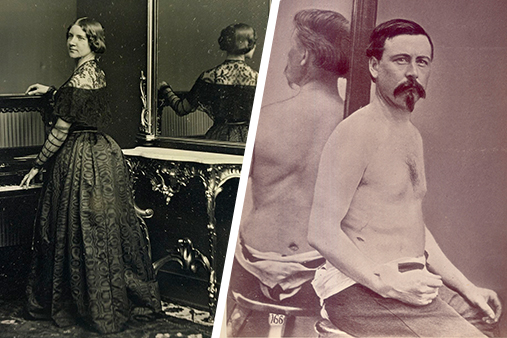 Right: One of the early clinical photographs with a mirror, 1862. Photo: Otis Historical Archives, National Museum of Health and Medicine.

Imagine a soldier from the American Civil War, dressed in his uniform, posing for his portrait in a photo studio. He is placed in front of a mirror, and soon our attention is drawn towards an aberration: his shirt is rolled up, revealing two scars, one at the front of his body, the other at the back.

- When photography was introduced in the first half of the 19th century, portrait photographers were responsible for most of the pictures that were taken, including the medical pictures, says Øystein Horgmo. He is a photographer at the Institute of Clinical Medicine and recently published the first ever scientific article on the use of mirrors in clinical photography in the 1800s.

- No conventions for clinical photography had yet been developed, so even though they were taken with another purpose than portraits, the aesthetics were the same. Most likely, the prevailing conventions for portrait photography inspired the use of mirrors to document injuries that were visible on both sides of the body, such as gunshot wounds and amputations, he continues.

One of the first known portraits to include a mirror is a daguerreotype of the soprano Jenny Lind, taken in 1848. The portrait was shown at the 1851 world fair, and the jury placed special emphasis on the effect of the mirror image. The jury’s statement said “That the reflection in the glass is equally perfect with the original is the point worthy of remark and commendation”.

The first clinical photographs with mirrors appeared soon after. Shortly after the outbreak of the American Civil War in 1861, the Army Medical Museum was established to document examples of injuries to be used in the development of military medicine and surgery. The photos that Horgmo has studied came from this collection, and were taken between 1862 and 1882.

However, the reason for taking these pictures was often unrelated to any medical interest. The pictures submitted originally had a more practical purpose, to serve as documentation in the injured veterans’ applications for a pension.

The pictures that Horgmo has studied were not only taken in a portrait photographer’s studio. They also include all the props that were common in the portrait photographers’ studios in the 19th century: heavy curtains, plants, artfully made tables and chairs and broad-framed mirrors.

- The pictures were taken before any guidelines for medical photography had been established, and the photographers therefore quite naturally followed their accustomed conventions, Horgmo explains.

The men in the pictures often pose as for a classical portrait.

In the picture to the left, we see a man pensively leaning on an armrest with his shirt discreetly raised to reveal a scar on the side of his abdomen, while the scar from the exit wound can be clearly seen in a mirror placed behind the chair. The man has been identified as Sergeant L. Morell, and his scars testify to a gunshot wound.

The picture below to the right shows General Henry Barnum, dressed in uniform. He is leaning on a couple of thick tomes on a table, holding his jacket and shirt aside with his left hand.

- At the first glance, it may appear as though the medical aspects are of secondary importance among all the props. Looking closely, however, we see that the scars are cleverly framed and highlighted by the arms, hands or in the way the mirror has been positioned, Horgmo points out.

In the picture of Henry Barnum, the scar from the exit wound is clearly framed by his hand in the mirror, making it a focal point.

Sergeant L. Morell is clearly holding his arms away from the scar, and the mirror has been positioned to show the scar from the exit wound in a top corner of its frame.

There are, however, also examples of pictures that have failed completely, where the artful positioning of arms and props produces a total confusion as to what is seen in the mirror, or even covers the scars instead of highlighting them.

The mirror as a historic marker

The mirrors in these pictures link the development of surgery, photography and firearms. The American Civil War was one of the first wars that involved firing of ammunition that was sufficiently powerful to send a bullet straight through the body, resulting in wounds at the back as well as the front.

More powerful firearms combined with infected wounds also led to a number of amputations, but improvements in surgical techniques meant that many now survived amputations and other serious injuries.

At the same time, the invention of photography and the development of photographic techniques made documentation of the injuries both simpler and cheaper.

The mirror combine the history of all this in one and same picture. It highlights the three-dimensional injuries that were caused by the new firearms, but also the fact that the injury has healed in such a way that the patient has survived. Not least, the photograph in itself represents a historic object that tells a story of the photographic technique, composition and aesthetics of its time.

- The last pictures I know of that use mirrors in this way were taken in the early 1900s, says Horgmo.

- I have not found a good explanation for why they stopped using mirrors. Film and photography was already much cheaper, so most likely the mirrors were used to include both perspectives in the same picture, and not primarily to save money by taking only one instead of two pictures. Yet, the technique was not very widespread, so perhaps it was simply forgotten.

As clinical photographer in a modern hospital, Horgmo is toying with the idea of attempting to reintroduce mirrors in his practice. Perhaps a half-forgotten historic technique can add a new touch to the high-tech hospital environment of today?