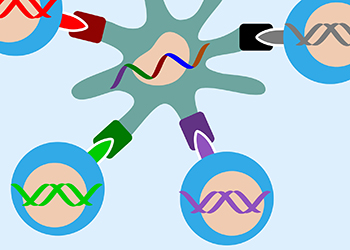 At the centre is a synthetic string of DNA with cancer mutations. This has been inserted into an immune-stimulating cell from a healthy person. The multicoloured balls represent immune cells that recognize the mutations and latch onto the cells in order to fight them. © Science Shaped

Researchers at the University of Oslo and Oslo University Hospital have found a way of programming the immune cells of cancer patients to fight the disease using immune cells from healthy people.

This method enables the immune defence system to launch a targeted attack on cancer cells without harming other cells. The treatment will therefore not be causing the side effects that cancer patients currently suffer.

The study is a partnership project involving the University of Oslo, Oslo University Hospital and the Netherlands Cancer Institute.

Immunotherapy is a treatment that aims to fight cancer by using parts of the immune defence system. So far, researchers in this field have concerned themselves with using antibodies to block the immune cells’ internal brakes. This may be a trigger for the immune cells that recognize the cancer cells to attack and kill them.

– Cancer is caused by changes in our DNA, so-called mutations, says Johanna Olweus.

She is Professor at UiO’s Institute of Clinical Medicine and heads the Department of Immunology at Oslo University Hospital’s Institute for Cancer Research. In addition, she leads the K. G. Jebsen Centre for Cancer Immunotherapy, where most of the research has taken place, and is joint last author of the study.

– Cancer may be caused by various types of mutation in different patients, and in many cases the patient’s own immune cells will have lost their ability to recognize the mutations. In our study, which was based on malignant melanoma in three patients, we found several hundred mutations, and the immune cells that were isolated from patients could recognize only two of them, says Olweus.

The findings provide a solution to this problem by suggesting the possibility of using immune cells from a healthy donor to adjust the treatment to the individual patient. The principle is so universal that it may be adapted to fight all types of cancer.

The new principle is based on the mutations that take place within each cancer cell. The researchers identified the DNA code for the cancer cell mutations by using standard technology and have used this to create a new, synthetic string of DNA. This synthetic DNA string is inserted into immune-stimulating cells obtained from a healthy donor, and these cells are cultivated with immune cells from the same healthy person. This process takes place in cell cultures in the laboratory.

In this way, the patient’s immune cells obtain the ability to recognize the cancer as an alien substance, which enables them to direct a targeted attack on the cancerous cells without harming other cells in the body.

– The immune defence system of a healthy donor recognizes many more mutations than the patient’s immune cells are capable of. If this fact can be exploited for the purpose of cancer treatment, it means that we will be able to attack the cancer cells from a greater number of angles, which will increase the possibility of finding a more effective treatment, says Erlend Strønen. He is a medical doctor and PhD fellow, and is the first author of the study.

The road to treatment

The researchers have already carried out the entire process, except for the very last stage, which involves re-inserting the immune cells into the patient.

- This study has showed that it is possible to “outsource” effective and cancer-specific immune responses to the immune defence system of a healthy person. There are great advantages associated with a personalized treatment which is independent of the patient’s own weakened immune system, says Olweus.

– Of course, we are eager to take the next step on the way to treating patients. Much of the required infrastructure and competence is already available at Oslo University Hospital. We are now working to ensure that the missing elements are put in place, and hope for support from the hospital and elsewhere in this respect.

The Dean of UiO’s Faculty of Medicine, Frode Vartdal, is keen to see patients benefit from these results:

– It is important that studies like this are followed up with clinical testing, and that the trials can be conducted in Oslo University Hospital’s GMP facilities. However, conducting this type of clinical study is so costly that we depend on funding from government support schemes for innovation, such as the Research Council of Norway, Innovation Norway, or from private businesses and investors, Vartdal points out.

Gunnar Sæther, who is head of department at Oslo University Hospital’s Institute for Cancer Research, is pleased with the results and is keen to see that they are put to use as soon as possible:

– These results represent a breakthrough, and it is important that this new knowledge is put through to clinical trials in the near future. The technology paves the way for broader and stronger immune response to the cancer cells’ many genetic variations, and in principle, we should be able to use this against most types of cancer, says Sæther.

Even though it is a costly process, the socio-economic benefit of a cancer treatment that leaves the patient free of side effects will be enormous.

The research was conducted at the K.G. Jebsen Centre for Cancer Immunotherapy at the University of Oslo and Oslo University Hospital. One of the teams working for the centre is based in the Netherlands, at the Netherlands Cancer Institute, and is headed by Ton N. Schumacher, who shares last authorship of the article with Olweus.

– The international collaboration has been all-important. The first author of the study, Erlend Strønen, has travelled back and forth, working in close liaison with Schumacher’s team at the Netherlands Cancer Institute. Similarly, the researchers there have been coming to Oslo to conduct experiments. This has been important for the development of the method, and not least for the mutual exchange of technology, says Olweus.

Gunnar Sæther, who heads the department, is also convinced that the international partnership has been key:

– These are the results of a long-running, close collaboration between two leading research groups, and they confirm Oslo University Hospital’s international position in the development of novel immunotherapy against cancer, says Sæther

– The fact that the K.G. Jebsen Foundation has allowed us the freedom to partner with the very best people in the field, which in this case is an international team, has been essential for us to achieve these results, emphasizes Olweus, who leads the centre.

She would also like to acknowledge the considerable support received from other funding bodies, such as the Research Council of Norway and the Southern and Eastern Norway Regional Health Authority.