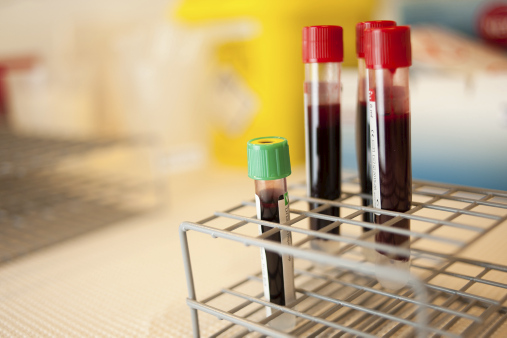 Blood tests can show whether there is an imbalance in your hormones. And yet an imbalance does not necessarily mean you are ill. Photo: © UiO/Øystein H. Horgmo

Colloquially, hormones are often associated with sex drive. Premenstrual women, men full of testosterone. Not to mention the poor teenagers with "hormones raging through their bodies."

What many don’t know is that hormones also control body weight, regulate hunger and satiety, ensure that the balance of water and salt in the body is correct, and that the immune system is functioning as it should. Having hormones raging through your body is not all bad news.

Hormones are vital, and that they can become a little imbalanced is something we have to live with. But when does an imbalance become so large that it is defined as an illness?

Medical doctor and PhD candidate Kiarash Tazmini and endocrinologist Anders Palmstrøm Jørgensen have made it a little easier for healthcare professionals in Norway to figure this out. They are editors of Norway's first national guide to endocrinology, which was recently launched. They have had the support of many Norwegian endocrinologists who have written about their specialty, and all the work has been done on a voluntary basis.

The guide is freely available online, and is intended as an aid for healthcare professionals who investigate and treat diseases of the hormone (endocrine) system.

But what exactly is a hormone?

– We can think of hormones as the body’s postal system, says Jørgensen.

–It all starts in the pituitary gland, which is part of the brain. The pituitary gland releases signals into the bloodstream, which are picked up by hormone-producing organs. The organ produces a hormone, and the hormone performs a task.

–For comparison, we can think of our nerves as the body's e-mail system. When the brain sends out a nerve impulse, something happens immediately, whereas in the endocrine system it takes a little time for the signal to reach the recipient organ and produce a result.

It is not necessarily true that every imbalance in the endocrine system is the result of illness. Our hormones are also affected by lifestyle.

– Lately, for example, it has become commonplace to blame testosterone deficiency when men reach 40 and begin to experience middle-age spread and lack of energy. But it is completely normal for people who lead stressful lives with little sleep and exercise, and lots of smoking and alcohol to end up with low testosterone levels.

– In this case the hormone is out of balance because of a poor lifestyle, and that’s not the same as illness, Jørgensen points out.

He thinks it’s important for doctors to distinguish between hormonal imbalances due to lifestyle and those caused by disease.

PMS is no joke

Sex hormones, which are what people often mean when they refer to “hormones” in everyday speech, are produced in the genitals. Oestrogen and progesterone are made in the ovaries, whereas testosterone comes from the testicles.

In addition to playing an important role in preparing a woman’s body for fertilization, oestrogen and progesterone act on many other cells and tissues. But the most visible effects in everyday life are those on mood that may occur prior to menstruation: PMS. If the egg is not fertilized during ovulation, the body stops producing progesterone and oestrogen. This is when the symptoms of PMS occur.

– We don’t quite know what it is about the sex hormones that cause women in general to have slightly more unstable moods than men. But there is no doubt that PMS is real. Many tend to laugh about it, but it’s a genuine phenomenon. For some, the effects can be very dramatic. There’s a Swedish study showing an increase in the suicide rate among premenstrual women, says Jørgensen.

There are many other hormones that make things happen in the body.

Most of us have heard of insulin, but not everyone realises that it’s a hormone. Whenever we consume carbohydrates, cells in the pancreas detect this and start to produce insulin. Insulin ensures that the sugar in the bloodstream enters the cells where it is either metabolized or stored as fat.

Put simply, we can say that insulin acts as a gatekeeper to ensure that sugar enters the cells.

The disease we associate most often with insulin is diabetes. Type 1 diabetes occurs when the cells in the pancreas that make insulin are destroyed. Without insulin, sugar fails to enter muscle and liver cells, and instead accumulates in the blood.

This leads to lethargy, weight loss, excessive urination and increased thirst. If blood sugar levels become very high, the patient can fall into a coma.

In type 2 diabetes, which is linked to lifestyle, the problem is that insulin no longer functions effectively enough as a gatekeeper. We call this insulin resistance. To begin with, the body tries to compensate for the inadequate effects of insulin by making more insulin. After years of this, the insulin-producing cells become worn out and die. Blood sugar levels then rise and the patient develops symptoms.

If type 2 diabetes is discovered early, it can be kept in check through changes in lifestyle, but often it must be treated with medication. Type 1 diabetes always requires treatment with medication.

Too much and too little are equally bad

The hormone cortisol is often discussed in the media in connection with lifestyle issues. It is called the stress hormone because it enables us to cope with the various stresses and strains we experience in everyday life. Cortisol helps the body to mobilize when faced with danger or adversity.

Another important stress hormone is adrenaline, which is rapidly secreted into the blood whenever danger threatens. This is based in our instincts, which for many thousands of years have equipped us to respond to danger with fight or flight.

However, too much cortisol in the blood over time is not good for you. It leads to poor concentration and memory, and decreased immunity. The constant state of readiness damages the body, and cortisol ends up having the opposite effect to that intended: Our muscles become weaker, our bones more fragile and our bodies worn out.

This is what happens when we lead stressful lives. Indeed, if we believe the tabloid press, there is nothing good to be said about cortisol.

But in reality we couldn’t manage without cortisol either. Having too little cortisol also leads to feelings of extreme fatigue.

When we are stressed, our bodies produce too much cortisol. The solution to restoring balance in this case is to relax.

But stress is not the only reason why the body might produce too much cortisol. In some cases a benign tumour in the pituitary gland produces too much of a substance that tells the adrenal glands to make cortisol.

The endocrinologist’s task is thus to investigate and uncover the reason why the body is producing too much of the hormone.

Overproduction of hormones is most often linked to benign tumours in the organs that produce the hormones. In such cases removing the tumour largely solves the problem.

Hormone levels that are too low often have a different cause:

– The most common cause of hormone deficiency is autoimmunity. In autoimmunity the body's immune system does not recognize its own cells and begins to attack them, Tazmini explains.

Type 1 diabetes is an example of this. Here, the immune system attacks and destroys the cells in the pancreas that produce insulin. The most common way of medicating such diseases today is to regularly supply the body with the hormones it no longer manages to produce itself.

There is a broad spectrum of diseases affecting the endocrine system, and many are relatively rare. It is not necessarily easy for GPs to keep track of them all.

The newly published guide will make an important contribution to ensuring that patients with these rare diseases are seen more quickly by specialists and receive the correct diagnosis and treatment.