UiO Faculty of Medicine Institute of Clinical Medicine
Main navigation
Back to uio.no
Sub navigation Menu
Research > Research news and events > Research news > 2016 > The art of waking up a cell
Norwegian version of this page 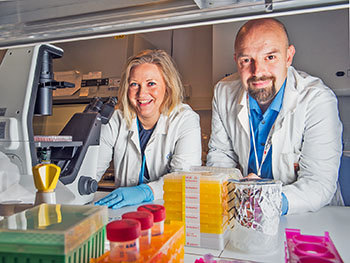 Our immune system protects us against all sorts of external and internal threats, like bacteria, viruses, parasites and cancer cells. But with this great versatility comes an increased probability for things to go wrong.

When the quality control fails

In among all the helpful immune cells, there are some that may attack the body’s healthy cells. They kill or harm the body’s own cells, and we develop what is referred to as an autoimmune disease.

The group of autoimmune diseases includes some common and well-known conditions such as rheumatoid arthritis, type I diabetes and multiple sclerosis.

For us to avoid these diseases, the harmful immune cells are put out of action. Immune cells that recognize their own tissue are either killed or put into deep hibernation, a bit like Sleeping Beauty. These sleeping beauty cells have been the focus of the researchers’ attention at the Centre for Immune Regulation (CIR).

If the cells’ hibernation is interrupted, we risk contracting an autoimmune disease. For immune cells that escape cannot differentiate between friend and foe, and they attack our own tissue as if it posed a genuine threat.
P. Szodoray

For a long time researchers from all over the world have been wondering what happens in the decisive moment when the quality control fails? Even though we know a great deal about autoimmune disorders, the events that occur as the disease is triggered remain largely unknown. What mechanisms are at work in that moment?

These are the white areas of the map that the CIR researchers have now started to fill in.

Waking up an unwanted Sleeping Beauty

Researchers Peter Szodoray and Britt Nakken at CIR have headed the work. They have looked for answers in the collaboration processes between T and B cells, two key players in any immune response. B cells play an important role in virtually all autoimmune diseases, and the researchers at CIR have studied B cells put into hibernation.

“These cells have already been stopped by the quality control system,” says Szodoray, “and cannot play a part in the immune response. But what if they were to be roused from their sleep?”

A kiss from a T cell

For normal B cells to become active they need help from T cells. However, dormant B cells receive no such help. Not in healthy people. For if everything goes to plan, the relevant T cells have been removed. And besides, it would take rather a lot to wake them up.

Szodoray and Nakken have been looking for the type of stimulus that can nevertheless awaken sleeping beauty B cells. What stimulus triggers new activity, thus contributing to the onset of an autoimmune disease?

“We found that if these cells nonetheless were to receive help from T cells, they are in fact capable of being reactivated,” says Szodoray.

“We wanted to know if this has any relevance in actual instances of autoimmune disease,” continues Szodoray. “We therefore compared dormant cells from healthy people with those from lupus patients.”

Lupus is a connective tissue disease that may affect the skin, joints, kidneys, nervous system, heart, lungs and blood cells.

“We found that in these patients, the sleeping beauty cells are much easier to arouse. The trigger stimulus need not be as strong as for similar cells from healthy people,” explains Szodoray.

After awakening, the formerly dormant cells can produce antibodies. This protein is normally used in the fight against bacteria and viruses, but antibodies from sleeping beauty cells can attack the body’s own tissue. As a result, the risk of developing autoimmunity is high.

While dissecting stimuli and processes, the CIR researchers came across key molecules that may be of practical use in the future.

The most important one is called CD45. The level of CD45 activity is low in sleeping beauty cells. However, the CIR researchers have shown that its activity increases when the cells receive help from T cells. In the future, this may be useful for diagnosing patients with autoimmune diseases, and perhaps also for identifying people at risk of developing such diseases. The thought is that high CD45 activity may be an indication of autoimmunity or risk of autoimmunity.

Szodoray and Nakken would like to examine this more closely. They are planning further trials with patients who suffer from undifferentiated connective tissue disease (UCTD), which is assumed to be a precursor of lupus. They will be looking into the CD45 activity in sleeping beauty cells from this group of patients to find whether there is a connection between increased CD45 activity and an increased risk of developing lupus.

“We also envisage the possibility of a future treatment. For example, this may involve specially designed targeted medication which seeks out CD45 in sleeping beauty cells and suppresses the activity,” says Szodoray.

Because B cells play a key role in many autoimmune diseases, the findings may be useful for a number of disorders.

“I am convinced that sleeping beauty cells in too light a slumber are present also in other autoimmune diseases in which B cells play a key part,” concludes Szodoray. “This is not unique to lupus.”

Read the article in Journal of Allergy and Clinical Immunology.