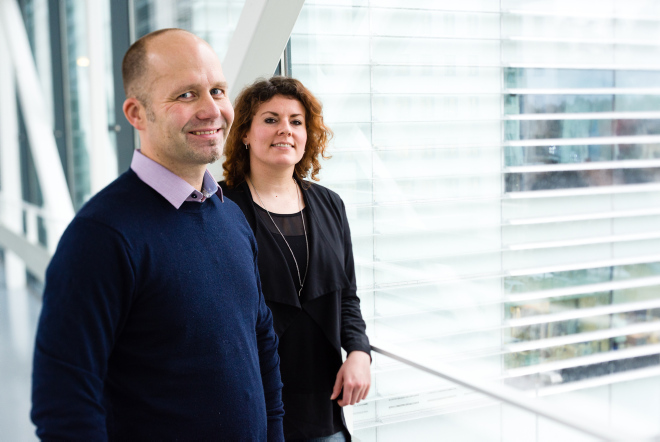 Different types of cancer develop in different ways, but all of them begin with uncontrolled cell division.

The mutations cause the cells to divide uncontrollably. Cancer cells gradually accumulate within the organ in which the growth began, eventually forming a tumour.

In a new study, researchers at the Centre for Cancer Biomedicine (CCB) have discovered how cancer cells grow. Using fruit flies, they found that cancer cells grow by extracting nutrients from their surroundings. These findings may have an impact on how cancer is treated.

The results are now being published in the journal Nature.

Cancer cells require extra energy throughout the growth process, and so change their energy consumption compared with healthy cells. When their healthy neighbours break down proteins into amino acid building blocks, the cancer cells absorb these and use them to grow.

The cancer cells thus trick their neighbours into supplying them with energy, and make use of sugars and amino acids from the bloodstream to grow and divide indefinitely.

– We were very surprised to find that cancer cells absorb nutrients from their neighbours in the form of sugars and amino acids, says PhD student and lead author Nadja Katheder.

The experiments to find out how neighbouring cells help the development of cancer cells were carried out in fruit flies. Fruit flies are widely used in experimental medical research as model organisms, since scientists can manipulate their genetic material by adding and removing genes.

– It means that we can study communication between cells while it takes place within the organism, explains Tor Erik Rusten, who led the study. The researcher has been involved in cancer research on fruit flies for more than 15 years, and emphasizes the importance of using flies.

– This could not have been discovered in any other animal model, other than perhaps mice, he says

The results of the study are similar to those obtained in studies of human cells. Researchers at Harvard have demonstrated the transfer of amino acids between healthy neighbouring cells and cancer cells, in tissues from patients with pancreatic cancer.

– We can say with great confidence that similar processes occur between cancer cells and healthy cells in cancer patients, but we do not yet know whether this happens in all types of cancer, says Rusten.

Through the process of autophagy or ‘self-eating’, old and damaged cells are broken down and removed. This is important in order to prevent proteins from clumping together.

Earlier this year, the Nobel Prize in Physiology or Medicine was awarded for fundamental studies of the degradation process autophagy.

The Harvard study found that neighbouring cells break down their own proteins through the process of autophagy and release amino acids, which the cancer cells then absorb and use.

However, the cancer cells were unable to grow if the researchers blocked autophagy in neighbouring cells, or prevented the cancer cells from absorbing the amino acids. This important finding may lead to the development of new cancer treatments.

– These studies provide a rationale for testing whether drugs that inhibit autophagy in healthy neighbouring cells would be useful in conjunction with conventional cancer treatment, says Rusten.

This approach is being investigated as an experimental treatment in a number of countries, but not yet in Norway.

– This work is an important breakthrough in cancer research and is very exciting in terms of future strategies for cancer treatment, says a delighted Professor Harald Stenmark, Director of the Centre for Cancer Biomedicine at the Institute of Clinical Medicine and Oslo University Hospital.

Tor Erik Rusten praises the support of the Norwegian Cancer Society and the Southern and Eastern Norway Regional Health Authority.

– Financial support over time has helped build up the research that led to these important findings. It shows too that long-term commitment to basic research provides high-quality results and results that will help provide better treatment for even more cancer patients, he concludes.

By Julie Nybakk Kvaal and Åsmund Eikenes
E-mail this page