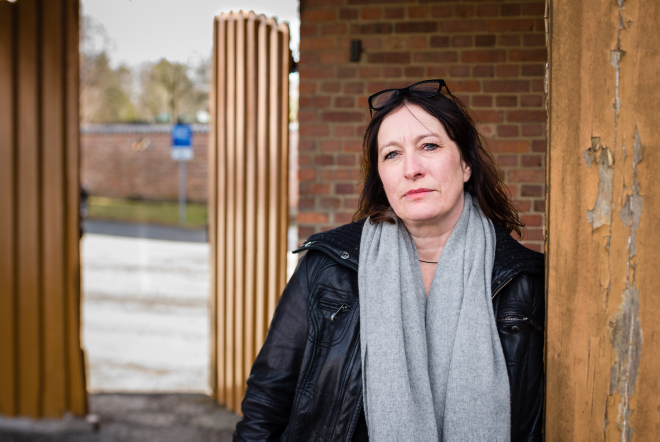 - It is important that we know that we can affect self-harming behaviour, Anita Johanna Tørmoen says. Photo: Øystein Horgmo, UiO.

– Self-harm is frequently one of many symptoms indicating that the adolescents struggle with issues related to mental health and challenging life events, Anita Johanna Tørmoen says. Tørmoen has written a PhD thesis on the subject at the Norwegian National Centre for Suicide Research and Prevention (NSSF) at the University of Oslo.

Self-harm and attempted suicide are often interconnected; many young people who harm themselves have also tried to commit suicide. These are young people with several psychosocial problems, and they are a difficult patient group to treat.

Tørmoen’s thesis demonstrate that Dialectical Behavioural Therapy for adolescents (DBT-A) may be a promising and effective treatment for young people with self-harming behaviour. The adolescents reported less self-harm and fewer thoughts about suicide, as well as fewer symptoms of depression after treatment. The study is the first of its kind in the world.

Self-harm is a symptom of emotional problems

By the term self-harming behaviour, we mean both attempted suicide and non-suicidal self-harm. Self-cutting is the most common way young people harm themselves.

– The most common reasons for self-harm are the desire to be free of intense, unpleasant emotions, and some young people also wish to die. This means that people who report that they demonstrate self-harming behaviour may also be at risk of taking their own lives, Tørmoen says.

Self-harming behaviour peaks during adolescence, and it is most prevalent among young girls and adolescents who are victims of depression, eating disorders, substance abuse and behavioural problems. Many young people also state that they struggle with poor physical health and a poor self-image.

Focus on coping and control during treatment

Helping young people suffering from recurrent self-harming behaviour can be a challenge. It is also difficult for people to be around someone who harms him or herself.

– Self-harming behaviour has a tremendous impact on next of kin, who may feel helpless, guilty, sad and angry, Tørmoen explains.

Therefore, an important part of the treatment for adolescents who harm themselves is to include their families so that they learn how to cope and develop ways to control suicidal behaviour together.

– DBT for adolescents is a 16-20 week-long, intensive treatment course for young people who harm themselves and for their families, Tørmoen says.

– Parallel with therapy, both the adolescents and their parents learn new coping techniques, and teaching is provided in subjects such as interpersonal skills, crisis management, regulation of emotions, mindfulness and how to handle typical teenage problems that may arise in families, the researcher says.

In her thesis, Tørmoen shows that both therapists and patients in child and adolescent psychiatry readily accepted DBT.

– We saw that DBT helped young people take control over their self-harming behaviour and find new ways to cope with the difficulties they encountered in their lives.

We can affect self-harming behaviour

Tørmoen’s research group also investigated whether DBT was a more effective treatment method than other treatments the adolescents had received in the specialized health service, such as cognitive therapy, psychodynamic or eclectic treatments.

– The study is the first of its kind in the world. No researcher before has ever compared, in a randomized, controlled study, DBT treatment with other specialized treatment of suicidal adolescents who harm themselves. In the field of psychotherapy research, suicidal tendencies are normally a criterion for excluding informants from a study, Tørmoen explains.

The study shows that adolescents in DBT reported less self-harm and fewer suicidal thoughts than young people who received regular, standard treatment. In addition, they were assessed as having fewer symptoms of depression than adolescents receiving regular treatment.

– Working directly to counteract self-harm may lead to more rapid improvement in patients. In addition, they acquire the tools they need to cope with problems in a different way, the researcher says.

Tørmoen thinks that DBT or other similar treatment regimens should be offered by psychiatric healthcare and that DBT treatment is so well described that it enables therapists to learn it.

– It is important that we are cognizant of the fact that we can affect self-harming behaviour. Therapists, adolescents and their families can receive proper treatment in the psychiatric healthcare apparatus if treatment methods like this are put into the system and are offered, Tørmoen concludes.