Older donors may mean shorter queues to get a new liver

In many countries there are long waiting lists to get a new liver. The solution is to use older donors, says Trygve Thorsen in his thesis. 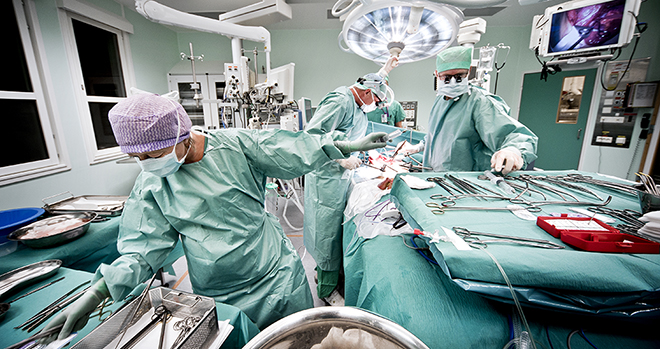 A crew is getting ready for a liver transplant. Photo: Ram Gupta.

Imagine that you have just been told that you need a new liver. An operation may save your life. The waiting list is long, however, and it is uncertain when you will be able to get a transplant. This is reality for many thousands of people throughout the world.

The solution is older donors

A new thesis shows that there is cause for renewed hope. The reason is so simple that it is hardly believable: Use older donors.

The thesis is written by Trygve Thorsen, PhD at the University of Oslo and Senior Consultant and surgeon at Rikshospitalet, the Oslo University Hospital.

‘Over time, Norwegian doctors have seen that there have been increasingly more elderly donors with excellent liver test results and with a a completely normal-looking liver  when it was removed. Only a few years ago, it was completely out of the question to use donors 50 years old or older’, Trygve Thorsen says.

In 2001 there was only one donor older than 75 in all of Scandinavia. The number of older donors has increased significantly in recent years. There are two reasons why the donor pool has become older: Fewer young people die in traffic accidents and more elderly people die of cerebral haemorrhage. In addition, waiting lists have become longer, in particular on a global basis.

‘In Norway the waiting lists are manageable’,  Thorsen explains.

The average age of liver donors in Norway is currently around 55, which is older than the previous highest cut-off age.

More and more research groups have published studies with figures showing good results for patients who have received livers from older donors. Despite this, older donors are not being utilized enough, especially in the USA where waiting lists are long.

‘We can't say that livers from older donors are as good as that of a 20 year-old, but in a situation where there is a lack of organs, we need to focus on using what is adequate. If you are in a situation where the only alternative is not getting a new liver at all, this is a good solution, says Senior Consultant Trygve Thorsen.

Several diseases behind the need for transplantation

Who are the people who need a new liver, then?

‘This can vary somewhat depending on where you are in the world, but on a global basis, the most common causes are alcohol-related liver disease, viral infections, so-called hepatitis or obesity. In the Nordic countries, the most common causes are liver cancer, primary sclerosing cholangitis, an autoimmune disease that occurs more frequently in the Nordic countries than in the rest of the world, and alcoholism’, he says.

Long waiting lists in many countries

In Norway, there are always about 20–30 people waiting for new livers. We have better access to donor livers than most other countries, because people on the waiting list in Norway get a new liver within three months.

‘This means that very few people die in Norway while they are waiting for a new liver. In the USA, the reality is totally different. The waiting list over there has as many as 14,000 patients, and every fifth patient dies before they can be given a transplant’,Trygve Thorsen concludes.