Immune cells at the centre of coeliac disease have been found in patients with other autoimmune diseases. These results give hope of finding the cause of a number of diseases. 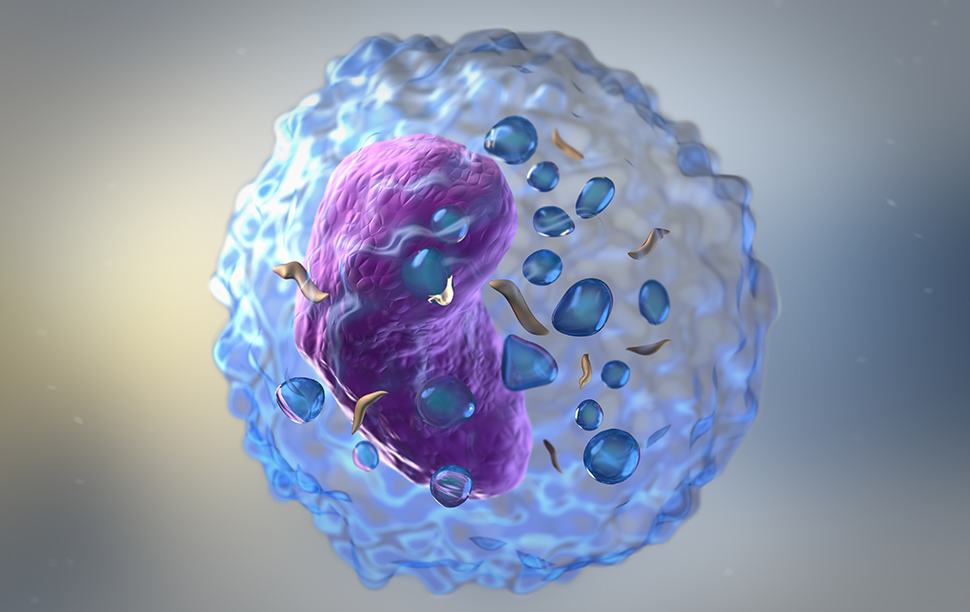 Lymphocyte are white blood cells in the immune system consisting of T- and B-cells. Illustration: Colourbox.

With a few exceptions, we have so far been unable to develop an effective treatment against these diseases. Two important reasons for this are that we do not know what is being attacked in the body, and we have not managed to identify the responsible immune cells.

The cells that drive coeliac disease have a highly unique profile, and the same type of cells have been found in elevated numbers in the blood of patients with other autoimmune diseases. This has been demonstrated in a new study by Asbjørn Christophersen, colleagues at Stanford University in the United States, and Professor Ludvig Sollid’s group at UiO.

T-cells attack something that is harmless

To understand what the scientists have discovered, we must first look at what happens in coeliac disease and other autoimmune diseases.

‘One type of immune cells, called T-cells, distinguishes between what is dangerous and what is harmless. In coeliac disease and other autoimmune diseases, the T-cells steer an attack against something that should really be harmless’, explains Christophersen. We are then left with some questions:

Coeliac disease is the key

Christophersen explains ‘We know a lot about the external appearance of different autoimmune diseases and we know that the body's own cells are destroyed. Nonetheless, we do not know exactly what it is that the immune cells recognize, and we have not been able to find the immune cells that are behind disease development.

’Coeliac disease is the only autoimmune disease where we know what it is that the immune response identifies as dangerous, namely gluten. We also know that T-cells that recognize gluten play a central role in the development of coeliac disease. Patients with coeliac disease have inflammation of the small intestine, and the immune cells attack both gluten and the body's own tissue.’

Same type of cells as in other autoimmune diseases

In coeliac patients, the cells that recognize gluten have an identical surface. Moreover, they belong to a very small subgroup of T-cells.

‘What is particularly interesting is that people with other autoimmune diseases had a high number of the same type of T-cells in their blood,’ says Christophersen. ‘On the other hand, we found very few of these cells in healthy people. The other diseases we looked at were lupus and sclerosis.

The researchers observed that after patients with coeliac disease ate gluten, the gluten-specific cells have a very distinctive profile. This profile consists of a combination of specific molecules or proteins on the cell surface.

Christophersen and his colleagues used phenotyping to determine this unique profile. One prerequisite for success was the development of a new method, combining specific staining of cells that recognize gluten with another method for staining cells, by Christophersen during a research stay at Stanford University.

‘With these staining methods, we can divide the cells into groups based on their external and internal characteristics. In our study, we have specifically looked at proteins expressed on the surface, but we also investigated the cells’ mRNA. mRNA is small copies of cells’ DNA and these are located inside the cell. mRNA instructs the cell as to which proteins should be produced and expressed on the surface. The studies on the cells’ mRNA also revealed a lot about how the cells communicate with other cells.’

Hope for improved knowledge and treatment

‘However, the study does not show that gluten has something to do with other autoimmune diseases. This is an important point’, says Christophersen.

‘Now the hope is that we can find what the immune cells recognize and attack in other autoimmune diseases. We hope and believe that we can also use this knowledge to develop drugs that will disable these cells which play such a central role in autoimmune disease. We want to achieve something similar to that which researchers have achieved in recent years with immunotherapy against cancer.’

Reference: The study was published in Nature Medicine on 25 March