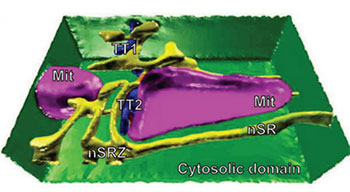 3D dyadic map. Indicates functional junctions between T-tubules (TT) and the sarcoplasmic reticulum (SR). Similar maps are being created during development and disease progression by combining electron and super-resolution microscopy.

Previous work by our group and others has shown that dyads form gradually during heart development and break down during disease.

The project is focused on examining the structural arrangement of dyads and how this structure is controlled. Understanding how disruption of dyadic structure during disease occurs will create a basis for developing novel therapies for heart failure patients.

Our first objective is to determine the precise 3D structural arrangement of dyads and their proteins during development, adulthood, and heart failure in the greatest detail possible.

To this end, we are employing CLEM imaging, which is a combination of 3D super-resolution light microscopy and electron microscopy (see figure).

We additionally aim to determine the signals responsible for controlling dyadic formation, maintenance, and disruption.

We are currently employing high-throughput sequencing to identify novel genes involved with these processes. Candidate genes are manipulated in cell models and transgenic animals to promote dyadic formation and maintenance, and reverse dyadic disruption in heart failure.

Finally, we aim to understand the consequences of altered dyadic structure for contraction of the cell and whole heart.

These analyses require both experimental testing and mathematical modelling, and are critical in linking the cardiac dysfunction observed in heart failure patients to sub-cellular structural disruption.

Upon completion of the project, 3D “dyadic maps” will have been created at various stages of heart development, adulthood, and heart failure progression, giving unprecedented understanding into how these structures regulate contraction.

New comprehension of the genes controlling these structures will aid the development of treatments for cardiac patients, employing therapeutic growth and/or maintenance of dyads.

The 5 year project was initiated in July 2015 and is based in the group of Professor William Louch at the Institute for Experimental Medical Research (IEMF) at the University of Oslo and Oslo University Hospital.

Specifically, a technique called PALM is employed which enables 20 nm resolution of fluorescence in three dimensions.

To improve upon the localization accuracy of this technique, antibody labeling is avoided whenever possible in favor of experiments with endogenously labeled dyadic proteins of interest. These results will be compared with imaging of tissue from explanted normal and failing human hearts.

Other state-of-the-art techniques available at nearby core facilities include cardiac MRI, and mRNA sequencing.

Additional funding for the group is generously provided by South-Eastern Norway Regional Health Authority, Anders Jahre’s Fund for the Promotion of Science, Norwegian Institute of Public Health, Oslo University Hospital Ullevål, and the University of Oslo.