A drug development project started by the Taskén Group at NCMM is at the centre of a new and unique co-development agreement between a Norwegian start-up and an Indian pharmaceutical company. 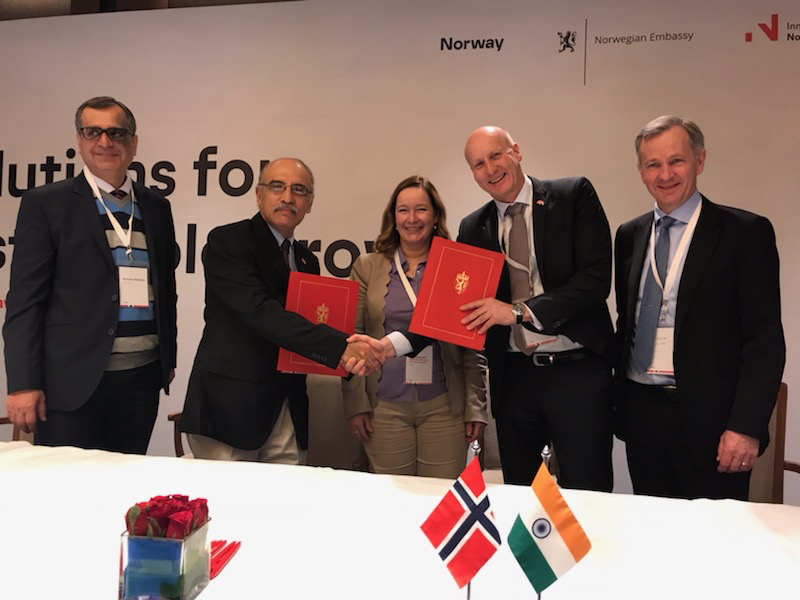 The co-development agreement, established between the Norwegian company SERCA Pharmaceuticals, and Cadila, an FDA-approved Indian pharmaceutical company, will now work to further develop the findings initiated by the Taskén Group and researchers at the University of Oslo (UiO) and Oslo University Hospital (OUH). The agreement was officially

recognised at a signing ceremony on Monday 7 January 2019 in New Delhi, India, in connection with a state visit by Norwegian Prime Minister Erna Solberg.

Project now has the opportunity to enter human trials

The original project, which started some 20 years ago, involves drug development research into ischemia-reperfusion injury in myocardial infarction – more commonly known as a heart attack. The research relates to the discovery of a signalling complex in heart cells that mediates one specific effect of adrenalin, findings which were originally published in EMBO Reports in 2007. The new co-development agreement between SERCA and Cadila means that the project now has a real chance to begin human trials.

The findings have now been taken forward to a drug candidate and the effects have been documented biochemically in heart cells, via electrophysiology, on normal rat hearts and in rats with ischemia-reperfusion injury, showing a cardioprotective effect.

“We hypothesised the presence of a signalling complex that could mediate adrenalin regulation of removal of calcium and relaxation. This formed the basis of a line of research started in 1998, with the publication of the discovery of this signalling complex in 2007.

“Since 2008, we have been working on the development of small molecules that disrupt this regulation and that block this particular effect inside heart cells. The findings have progressed through chemical biology and drug screening, and then the hit-to-lead process to verify the compounds suitable for further testing.

The documentation of the effects in cells and animals meant that we now have a disease model that shows that our small molecules are cardioprotective in the acute phase of myocardial infarction when presented with ischemia-reperfusion injury.

“This disease model that shows proof of concept in animals is extremely exciting. We are very pleased that within this new setting offered by SERCA Pharmaceuticals, the project can now be taken further. The concept developed by NCMM, UiO and OUH now has a real chance to be tested in humans.”

The project has been 10 years’ hard work in the making, involving members of the Taskén group: former postdoc, Birgitte Lygren; former PhD student, Ellen Østensen; and former postdoc and now researcher Ana Calejo, who is supported by a UiO SPARK grant. The primary drug screen ran first at the EMBL (European Molecular Biology Laboratory), with the secondary and tertiary screens running on the NCMM Chemical Biology Platform, which is currently led by Johannes Landskron.

Ellen Østensen comments: I started working on this project as a master student, and was lucky to have the opportunity to continue the work as a PhD fellow.

The result we now see in terms of the co-agreement comes from years and years of hard work performed by a team of dedicated people. Seeing all this hard work pay off is very exciting, and I look forward to seeing what the future brings for the project.

Professor Jo Klaveness, Institute of Pharmacy, UiO, Professor Ivar Sjaastad, and researcher Jan Magnus Aaronsen, of the Institute for Experimental Medical Research at Oslo University Hospital have also been very involved with the project. The work has been carried out in collaboration with Inven2, with Mohammed Amarzguioui and Kristen Sandereid supporting with technology and business development.

Ana Isabel Costa Calejo adds: As a researcher, it is very rewarding to be part of such a challenging drug discovery project. This agreement is an amazing achievement, and we are all very proud that we have come so far in this research project."

We are now a step closer to bringing this treatment to patients who suffer from heart infarction.

Start-up SERCA Pharmaceuticals AS was established in October 2018 by Inven2. Investor money has already been secured, with the company receiving a further boost in the form of a NOK5 million FORNY2020 grant from the Research Council of Norway. Kjetil Hestdal, the former CEO of PhotoCure, has also been appointed as CEO of SERCA.

Inven2 is the innovation company for UiO, OUH and all hospitals in the Helse Sør-Øst region. The company aims to drive innovation in research, and build links between research and technology-based industry.

The project team has now patented the research and the findings are expected to be submitted for publication in the coming months.

The original press release, detailing the agreement signing between Cadila and SERCA Pharmaceuticals, is available via NTB.no (Norwegian only).