We study the connections between membrane dynamics and cancer development. Many of the crucial biochemical reactions in the cell take place at the cell's membranes - the plasma membrane or the membranes of the cell's organelles. These membranes are highly dynamic and undergo continuous budding, fission and remodeling, and alterations in membrane dynamics can affect biochemical reactions. In our group we try to identify dysregulated membrane dynamics that leads to cancer progression. We are particularly interested in alterations of how the cells internalize large molecules by endocytosis, how they degrade molecules in lysosomes, and how dynamics of the membrane that surrounds the nucleus is regulated. 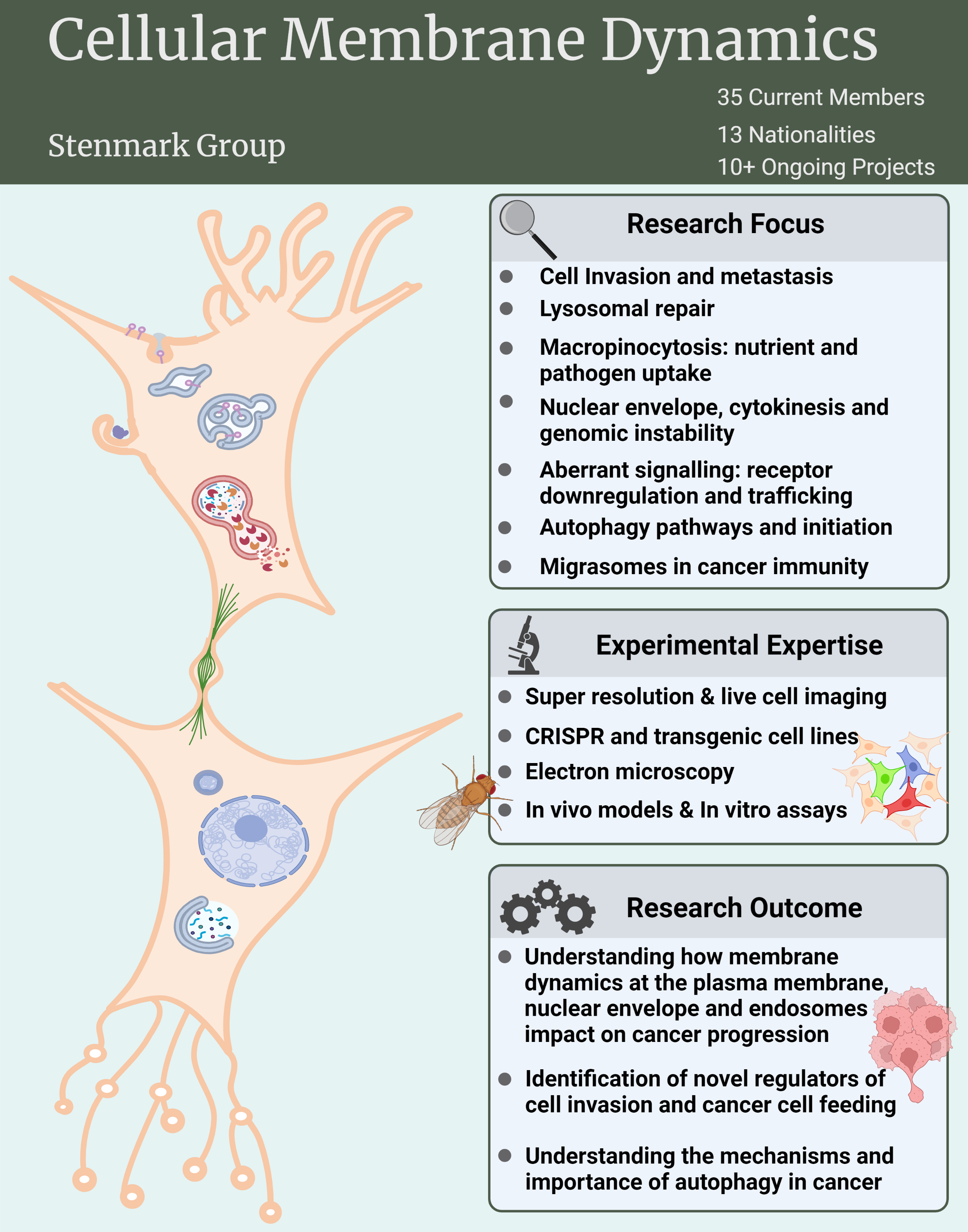 The cells in our body are compartmentalized by membranes, which are not static but undergo continuous budding, fission, fusion and remodeling events, collectively referred to as membrane dynamics. Such dynamics control most essential cellular functions, including signal transduction, cytoskeletal organization, polarity, migration, intracellular transport of lipids and macromolecules, and cell division. Not surprisingly, genetic or acquired aberrations in cellular membrane dynamics are associated with a number of diseases, including cancer.

In our group we are interested in the connections between membrane dynamics and cancer development.

Our starting point has been studies of a lipid that controls membrane dynamics, phosphatidylinositol 3-phosphate (PI3P). We discovered a conserved domain that binds specifically to this lipid, the FYVE domain, and we have been studying the functions of several FYVE domain-containing proteins.

One of the first PI3P-binding proteins we studied was HRS, an endosomal protein that mediates sorting of ubiquitinated membrane proteins, such as activated growth factor receptors, to the lumen of the lysosome. HRS is in complex with a related protein, STAM, and together these constitute a subcomplex of the endosomal sorting complex required for transport (ESCRT) machinery.

Originally discovered for its function in endosomal protein sorting and biogenesis of multivesicular endosomes (MVEs), components of the ESCRT machinery have turned out to have numerous functions in the cell, all related to regulation of membrane dynamics. One example is the abscission step of cytokinesis (the final stage of cell division whereby the two daughter cells become separated), and we have identified an ESCRT-interacting protein called ANCHR that serves a key role in the abscission checkpoint that halts cytokinetic abscission when lagging chromosomes are detected in the intercellular bridge. We recently found that components of the ESCRT machinery function to seal the reformed nuclear envelope during mitotic exit, thereby ensuring nuclear integrity and safeguarding the genome.