What does stitching has to do with cancer?

All cells in our body contain the “headquarters” of our genetic information, the nucleus, wrapped in a double nuclear membrane, similar to a protective bag. The DNA coding this information is packed in 23 chromosomes in those headquarters. Imagine a script with numbered pages. This script contains all the information for the actions that the cells are “programmed” to perform during their lifetime. Upon cellular division (mitosis), the script (DNA) copies itself in order both of the newly created cells to have an idea of what they are going to do with their lives. The genetic material is safely wrapped into nuclear membrane and voilà! Two brand new nuclei ready for new adventures! 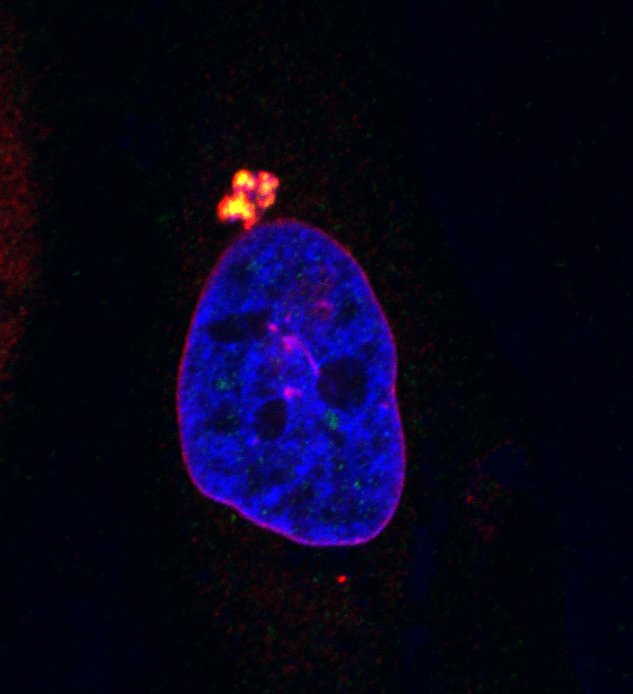 The picture shows the nuclei with red nuclear membrane and blue genetic material. When a cell divides, the chromosomes will gather in a new nucleus surrounded by a membrane. Sometimes one chromosome remains and forms its own small nucleus, a so-called micronucleus. Those can accumulate and be associated with cancer.

But how does the nuclear membrane accomplish to wrap and seal effectively around the DNA during this process of cell division? What would happen if the process was disrupted, leaving exposed DNA in the core of the nuclei?

In the case that the nuclear membrane is unable to seal properly or ruptures appear, the DNA is dangerously exposed. This can have detrimental effects for the cell well-being, leading to cancer development and abnormal cellular functions. In a previous groundbreaking study published in Nature, Marina Vietri and her colleagues displayed an elegant model of nuclear membrane sealing. Mistakes are human, and so are our cells. To avoid the detrimental consequences of a potential unsealed nuclear membrane, a protein complex called ESCRT III has taken up the role as a nuclear guardian. See how impressive its role is; during the critical moment of the new nuclear membrane sealing upon mitosis, a protein called CHMP7 “sits” on the sealing site giving the signal to the rest of the ESCRT crew to run and sew it. The ESCRT machinery and their collaborators are amazing tailors; they have a great technique in closing the nuclear membrane by stitching pieces together in a helix like manner (do not try this at home, you won’t be able to do it anyway). Now the job is finished. CHMP7 hits the road, the crew leaves the repaired site, the nucleus is happy, the cell is happy and healthy and this could be the end. But what are the odds?

Unfortunately, things do not always go according to the plan. Both in normal but more often in cancer cells, whole chromosomes or part of them fail to follow the rest of the group into the new nucleus during cell division. They wrap themselves into their own nuclear membrane and follow a solo career as micronuclei. And although solo careers are not necessarily a bad decision, it can very often be a catastrophic route to follow. It is now known that high percentage of the micronuclei are prone to rupture, and although the cells should in theory fix the damage, in practice they can deviate from that. Rather than repairing the micronuclei ruptured areas, a catastrophic cascade of events can take place by destroying the micronuclei and its contents, a phenomenon called chromothripsis. This is definitely far from good news. Cancer cells abound with destroyed micronuclei, which results in extensive DNA damage. Along with that, extended DNA damage is a major driver of carcinogenesis.

In a follow up collaboration between the Stenmark and Campsteijn labs, Marina Vietri, the first author of the study along with her colleagues, tried to define the mechanisms of this repair impairment in order to understand and break the micronuclei destruction vicious circle. Their findings published in Nature Cell Biology, were quite surprising. One would assume that the ESCRT III repair team would quickly fix any nuclear membrane raptures. However, the research team discovered that micronuclei can be the exception to the rule. In all likelihood due to their limited size, micronuclei are often incapable of maintaining control and sustain a balance in the otherwise important job the ESCRT III team would normally do. This can result in ESCRT partners getting a little overexcited with their repairing tasks. Imagine stitching a piece of fabric or, even better a cling film repeatedly, putting stiches over stitches. It will most likely completely deform and destroy it. And this is exactly the case with the micronuclei.

The journey of comprehending exactly how the cell works under normal and pathological conditions is continuous, exciting and difficult. Nevertheless, thanks to the CanCell research team, we not only better understand a critical stage of cancer development and progression but are also one-step forward towards the development of new and more sophisticated targeted drug therapies.

By Chara Charsou
E-mail this page

Welcome to the CanCell blog! Here we share posts about our research as well as our field of expertise.