Researchers from Ukraine at the Faculty of Medicine 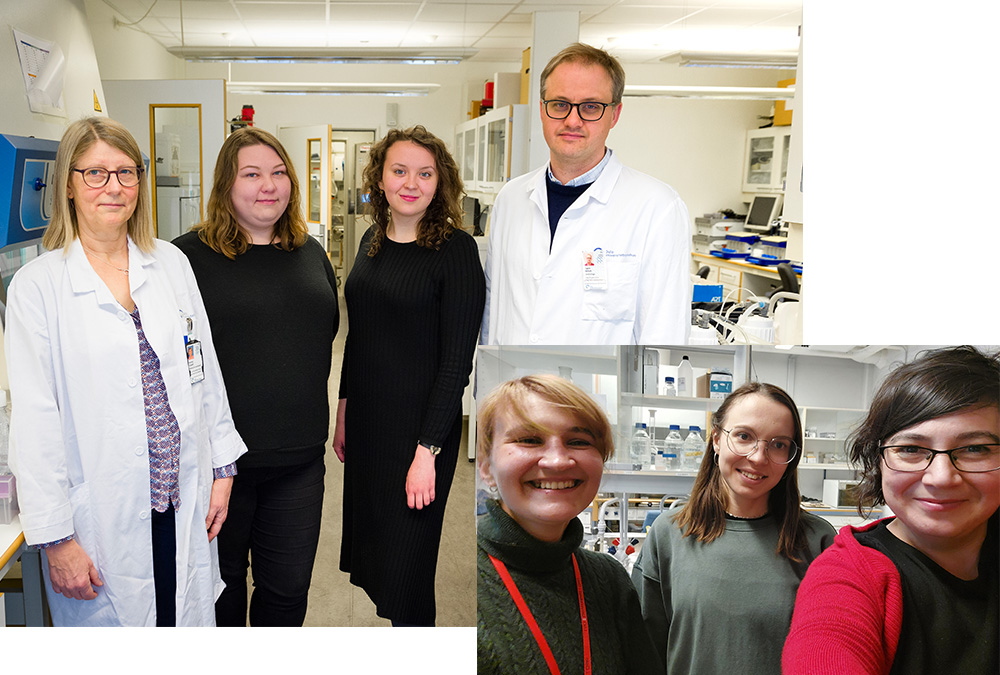 Picture in the back from left: Merete Tysdahl, Yuliia Boichuk, Taisiia Sazonova and Espen Melum. The photo was taken at the Department of Internal Medicine Research UIO and OUS. Photo: Øystein Horgmo, UiO.

I was working in Kyiv in the Institute of Cell Therapy for the last 4,5 year.

“As I worked on cell cultures back home in Kyiv, Espen Melum suggested that I could continue my work as part of his group,” Boichuk explains.

“At the University of Oslo, I will work on basic research and biomedical translational research with a focus on primary sclerosing cholangitis. I will also be involved with projects associated with organ-on-a-chip and will apply a number of different techniques,” she says and adds:

“I feel fortunate to have the opportunity to stay and work in Norway and at the University of Oslo as part of such a friendly and international research group. I will no doubt learn to master many different scientific techniques that I hope I will be able to use in my laboratory in Kyiv.”

“International collaboration has always been crucial to the Norwegian Centre for PSC and we have benefitted greatly from international networks,” Espen Melum explains.

The centre recently welcomed two Ukrainian refugees as visiting researchers, one from Kyiv and one from Kharkiv.

“After the first couple of weeks of the war in Ukraine, we were inspired by the #ScienceForUkraineinitiative, which aims to help researchers in Ukraine. We posted an advert hoping that we would be able to give something back to the academic community, while also helping individuals,” Melum explains.

“Yuliia Boichuk and Taisiia Sazonova, who both had relevant backgrounds, quickly got in touch,” Melum explains. Melum and his colleagues helped organise the journey to Norway and with finding somewhere to stay.

“When the refugee applications have been completed, both will be appointed by the Centre and will be part of relevant ongoing research projects. Everyone at the centre has been enthusiastic and welcoming,” Melum says.

Melum has made sure that there is office space and work available to them in his group and in Johannes Hov’s group.

“I plan to study changes to the intestinal flora in COVID-19 patients during hospital admission and several months after admission,” Sazonova explains and adds:

“I believe that I will learn a number of new laboratory techniques and have the opportunity to prepare for future independent research as a doctoral student, as well as improving my critical thinking and experiment design.”

She also intends to use her medical background to assist as an interpreter for Ukrainian patients who have been temporarily relocated and need to communicate with Norwegian doctors.

“This is an excellent opportunity for me to help my people,” she says.

Melum also explains that Professor Tom Hemming Karlsen has been supportive of the initiative from the start and that he has endorsed and authorised the use of funds for the initiative.

“The aim has been to provide a “safe haven” for research colleagues arriving as refugees from Ukraine for a few months while the situation in their hometowns hopefully improves,” says Professor Tom Hemming Karlsen, before continuing:

“Perhaps there are other communities that also have the capacity for this? Research is international, we work with international partners all the time and researchers have always been there for one another when the world has faced similar situations before.”

One of Charlotte Boccara’s postdoctoral fellows, Solomiia Korchynska, comes from Ukraine. Korchynska has been greatly affected by the war in her home country. Charlotte wanted to support her but was initially unsure how to do so. They had a vacant research position and a vacant laboratory technician position. After getting approval from HR, the Head of Section and Head of Department, they advertised the possibility of a short-term contract for a researcher from Ukraine at their laboratory.

“I figured that, as her PI, this was the best way for me to support her during this awful time when her country is at war,” Boccara says.

Taras Shevchenko National University of Kyiv. I worked as a biologist in the cell culture laboratory of the Institute of Cell Therapy.

“Even though my previous background is quite different to what I will do here, I am still extremely excited to have the opportunity to delve into the world of neuroscience. As a research assistant, I will have the chance to work on immunohistology and laboratory work. I will learn to prepare the electronics required for brain recordings and I will also care for the laboratory rats,” Okinina explains.

“I view this opportunity to work in Norway as a great opportunity for academic development. Learning new techniques, gaining new skills and working as part of an international team of highly qualified professionals will definitely help me further develop my career in Ukraine,” she explains.

“Solomiia helped me process the applications to identify who were good candidates for us and who would get better support elsewhere. She also helped us talk with applicants and understand their qualifications.” Lina Okinina was in Kyiv when she got in touch with Boccara and Korchynska. She turned out to be a good match for the laboratory technician position and arrived in Norway on 21 March, following a long and difficult journey.

Boccara organised temporary accommodation for her with a generous family that had space for a guest. Lina applied to the Directorate of Immigration for collective protection status a few days after arriving. When the protection status has been granted, Lina will be granted a work permit. Boccara has found that the Directorate of Immigration is unclear about how long this process will take and notes that it is crucial that Lina has the opportunity start work soon.

“What we are trying to do is to provide Lina with the status of a visiting researcher assistant in the meantime so that she can start working in the laboratory. We are also exploring the possibility of paying for her accommodation at SiO during this period,” Boccara says.

Melum is available to provide advice to communities wishing to welcome visiting researchers from Ukraine.

The researchers that have now welcomed visiting researchers from Ukraine hope that more communities at the University of Oslo will have the opportunity to do the same.

“When we have gained a better understanding of the system, we can take the initiative to invite more researchers and encourage our colleagues to do the same. It is crucial that we are prepared to properly welcome those we invite here,” Boccara says.

She explains that they received many strong applications during the first round and that they can make recommendations to colleagues if relevant.

“I found both the systems and individuals to be highly flexible and pragmatic in what is an unclear emergency situation where things are not necessarily running smoothly,” Karlsen says.

Karlsen and Melum would encourage interested communities to get in touch with Espen Melum or others with experience of the systems for advice and guidance.

The Rector would like to welcome the new visiting researchers!

The University of Oslo is working tirelessly to make it easier to welcome visiting researchers from Ukraine. Both the management and the Ukraine Coordination Group, headed up by Johan Løberg Tofte, are in dialogue with both the Directorate of Immigration and the Directorate of Integration and Diversity to ensure fast processing of residence permits and work permits. They are also working to ensure that the receiving authorities take into account the refugees’ academic backgrounds, both for established researchers and for students, when allocating accommodation to Ukrainian refugees.

Rector Svein Stølen thinks that the initiatives from Boccara and Melum and their research groups are fantastic.

“I would like to extend a warm welcome to our new Ukrainian colleagues,” he says and adds:“We are working to provide more Ukrainian researchers with the opportunity to come to the University of Oslo and we have an ongoing dialogue with the immigration authorities to encourage them to assign appropriate accommodation. This means that they will need to identify individuals’ expertise and background before making allocations and that they need to ensure that people are assigned accommodation in close proximity to areas where they can find relevant work or continue the studies they have already started. We will do everything we can, but we rely on the authorities being flexible,” the Rector concludes.

As soon as clarifications and new schemes are in place, the information about Ukraine and the University of Oslo will be updated.