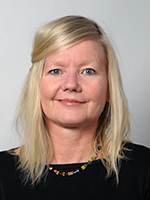 I work with Student Exchange at The Faculty of Medicine, and in particular with Incoming Students to the Medical Programme. Other tasks are related to admission and reception of new students, and back-up of MED-studieinfo.

I started at The Faculty of Medicine in 2007, and have performed different administrative tasks within student admissions, exams and exchange. Previously, I worked with studies in France at SIU, Norwegian Centre for International Cooperation, later DIKU, now HKDir, in Bergen. During the period 2001-2004, I was attached to Centre de Coopération Universitaire Franco-Norvégienne, previously being part of the UiO and later merged into SIU/DIKU/HKDir.

My higher education diplomas are from France, where I completed a Diplôme d'Etudes Supérieures Spécialisées en Sociologie Appliquée au Développement Social et Culturel at Université Lumière Lyon 2 in 1991. Between 1985 and 1990 I studied sociology at Université Paul-Valéry Montpellier III.