Women in Global Health (WGH) Norway together with the Centre for Global Health at the University of Oslo (UiO) and Equality Check celebrated International Women’s Day (March 8) with an event, “The Hidden Challenges of Professional Women.” 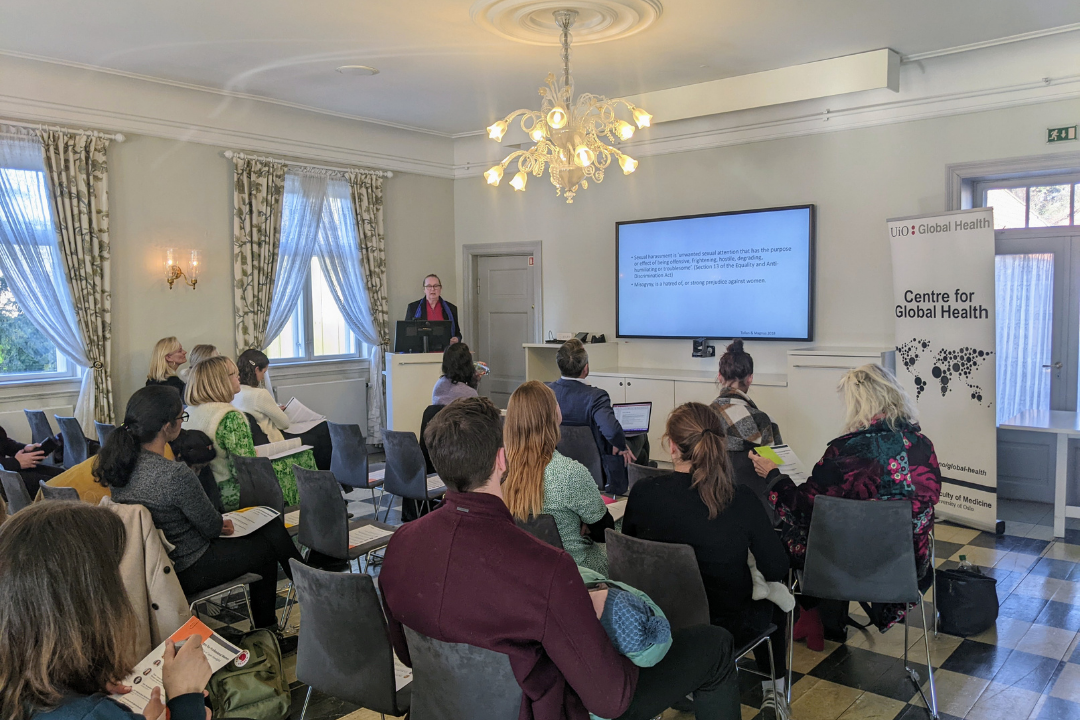 The speakers included; Jeanette H. Magus, Marie Louise Sunde, Candela Iglesias Chiesa, Shazia Majid and Ole Jacob Sending. Each speaker took a deep dive into a different dimension of hidden challenges and reflected on ways that organizations and the world are working towards mitigating them, bridging the gaps, and breaking the barriers.

Anne Bergh, the Director of Global Health at the Norwegian Institute of Public Health (NIPH) moderated the event.

Jeanette H. Magnus, The Director at Centre for Global Health, UiO – Misogyny – a Silent Epidemic in the Health Service

Jeanette H. Magnus gave an intriguing speech on misogyny. She started by saying,

“I am not a feminist, but I want equity and equality”

Based on the article from Tidsskriftet Den Norske Legeforening titled “Misogyny- a silent epidemic in the health service,” which she co-wrote with Anne Tollan, she describes misogyny as hatred or strong prejudice against women. She spoke about institutionalized misogyny using various examples from; the (a) Entrance Examination Misogyny in Japanese Medical Schools , (b)The Journal of Vascular Surgery and how it has shaped the medical institution. She quotes,

“Contempt of women affects both doctors and patients. It may lead to differential treatment and poorer health services. The phenomenon is a serious one in all areas of medicine “Tollan & Magnus, 2018

The final example was that of Association of Surgeon-Patient Sex Concordance with Postoperative Outcomes, where she quotes some findings from the article,

Using the article from Janet Bickle titled, “Is Gender Equity Possible in Academic Medicine or are There More Useful Goals on Which to Focus”, she quotes the article,

“…I maintain that further documentations of gender inequities are unlikely to reduce sexism or assist women to develop their potentials.  One of the challenges of accepting culture while working to change culture in this regard is that an emphasis on what has come to be known as diversity and inclusion has diluted a focus on gender-related issues.”

“But until those with positional power institute inequity-reducing practices such as evaluating department heads on their record of diverse talent development, academic medicine will continue to waste the strengths of an increasing proportion of faculty.” (Bickle, 2022) She concludes by highlighting the diverse types of actions that can be taken by individuals to address gender equity, which includes:

Marie Louise discussed different ways to improve diversity in the workplace. She touched on the unconscious bias, which she defined as how we treat people differently without being aware. She further discussed these biases in workplaces, stemming examples from her own firsthand experiences throughout her career as a female surgeon in a male-dominated field. She talked about how some patients preferred a male surgeon to her. She said,

“We haven’t overcome the biasness. This is why in Norway today; we only have 14% women CEOs”

She also added that women participation in the workforce could increase GDP in Western Europe with 2000 billion USD in the next 25 years, according to McKinsey. According to a previous analysis from Mckinsey, she says that only 24% of companies who implemented gender equality efforts succeed. Just as in the medical world, she gave the reasons why;

In addition to the two reasons above, she adds that unconscious bias, myth-based approaches and lack of evidence-based solution exacerbate this situation. As a result, it would take us 136 years to close the global gender gap if we do not act now, according to WEF. She also explained the role of Equality Check in assisting organizations create more equal workplaces. They collect and analyze data, identify problems and offer resources with evidence-based solutions that can be implemented. Equality Check also adds a layer of cultural data for nuance and clarification. She says that diversity and inclusion are higher on the agenda of many companies today and that is why Equality Check is striving to move organizations from insight to action. She concludes by saying, we as individuals have a role to play by being a part of stakeholders playing significant roles resulting in meaningful change.

Candela is the founder of Alanda Health, which supports organizations in global health using evidence-based needs. Alanda explores gaps that they see when working with partner organizations and work towards bridging them. She said that she started working on a problem that gave her curiosity a few years back and that she has been exploring until the end of 2021. That is, challenges in career development faced by young professional women in public and global health. This started because she is part of various networks in Norway, mostly international and due to her science background and health works, she keeps getting invitations from young professionals in science and health to talk about career development issues particularly in Norway, faced by internationals moving to Norway trying to look for job opportunities. When she talks to many of the public and global health professionals, the conversations and questions that come up during the coffee sessions are similar.

Alanda Health’s solutions to these challenges have been through one of its projects known as THRIVE, which ensures young professionals use their skills to master their productivity. This is through mentorship programs, databases, internships, symposiums, workshops, and internships.

Shazia is a journalist at VG and the author of the book “Ut av Skyggene”, translated in English as; Out of the Shadows - Immigrant Women in Norway – A History Lesson. Shazia’s story-telling style down her memory-lane is stemming from the challenges her mother faced as an immigrant woman in the 1970s, when her family migrated from Pakistan to Norway.

“Norway is one of the most gender-equal countries but this has come through struggle and fight by the Norwegian women”.

“When talking about immigrants, it is not an underexposed theme to talk about in Norwegian discourse and Norwegian context.”

She talked about her book and the hunt for numbers and statistics on immigrant women in Norway. No one in Norway had answers of how many immigrant women came to Norway in the 1970s. She was therefore encouraged to make her own statistical documentation. In Sept 2017, Statistic Central Bureau (SSB) published the numbers, which triggered her to ask, why now? She concluded,

“These stories need to be told because they survived and struggled to make a life for themselves even in the most demanding situation”.

As a part of his reflections, Ole Jacob gave a brief background of Committee for Gender Balance and Diversity in Research (KIF). It was established in 2004 and its focus was to initially increase the number of female researchers in the university sector. The second committee was tasked with looking at the institute sector while the third committee’s focus was shifted to gender balance. The fourth committee was tasked to gender balance and diversity in 2018 to 2021 and the fifth committee 2022-2025 has seen yet another expansion of the mandate, which now includes social background in addition to gender balance and diversity.

KIF is mandated to collect data, raise awareness, suggest measures and be available for advice for institutions in higher education and research institutes. In 2004, the proportion of women professors nationally was 17%. In 2017, 32% of the top academic positions were professorships held by women”.

Focus areas of gender balance and diversity in research at KIF:

He outlined the various arguments for gender balance and diversity including:

In addition, he touched on the research quality and blind spots:

Based on his own personal experience, Ole Jacob shared that when one has a new colleague with a different background, ethnicity, or gender and can use the space to do what he or she would like to do, the quality of the research they do is much better. It is remarkable how that has been overlooked.

His favorite commencement speech, This is Walter, by the late David Walter Wallace said,

“With the whole point being that we are so blinded by the everyday stress that we do not have the extra energy to try to think about how this looks from different persons perspective. Very often, the debates about diversity and gender balance are often a bit of zero-sum logic. And if you think about this purely from research quality and research relevance perspective, it certainly is not”.

This is something that he would like to try to contribute to in his work at KIF.

Marie Louise said that we could move forward to change the paradigm by;

Jeanette added that we have to say,

Ole Jacob added that they have so much data on imbalances and injustices, and it is a combination of continuing to raise awareness and model the private sector because that has a massive impact. It is therefore important to do reporting on gender and diversity-based issues, as it forces everyone to change.

In addressing the question, what is the most burning issue to address to close the gender gap among men and women, Shazia says that the answer would be to ensure that we do not become color-blind to color or immigrant women. The more we talk about it, the more stories and interviews help create awareness. When stories about these women are told, people listen and care and this is important to be told to the people.

Candela added that systemic and individual change is key. We also have our own individual roles to play.  Having talked to many people on these issues, the first step is that we all have our own conscious and unconscious biases devoid of our gender or nationality. Hence the starting point is to know our own biases.

By Brenda Jimris-Rekve
E-mail this page