The Women in Global Health Norway (WGH Norway) was launched on November 26th, 2018 in Oslo with an impressive academic programme followed by an informal reception. The newly established platform is hosted by the Centre for Global Health (CGH) at the University of Oslo (UiO). 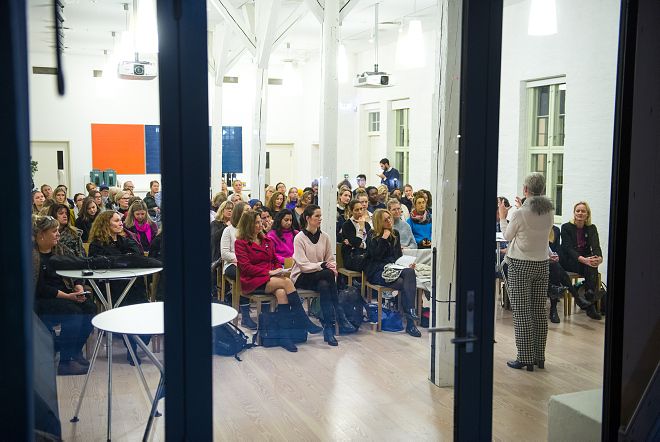 The event was moderated by Anne Bergh, Specialist Director at the Norwegian institute for Public Health.  Andrea Winkler, Director of the CGH, welcomed the crowd of over 100 guests and introduced the mission, vision and objectives of the newly launched platform. She was followed by opening remarks by Jens Frølich Holte, the State Secretary for International Development at the Ministry of Foreign Affairs (MFA). He expressed a strong support to the launch of the network, emphasizing Norway’s role as a game setter in gender parity and equality as well as in initiatives for women’s health.

Why do we need Women in Global Health in Norway?

The mission of WGH Norway is to create enabling environments for gender parity; promote gender-transformative leadership; lift up women’s health globally; and to inspire sister chapters in low and middle income countries (LMICs). In her welcoming remarks, Winkler argued for the need to improve gender parity in Norway, recalling that only 25% of women working in health are employed in leadership positions, with lower figures in the private sector. In the health service sector, women leaders earn only 80% of that earned by their male counterparts. In academia, women are well-represented among PhDs and post-docs, yet only 1 in 4 professors at Norwegian universities are women.

The opening remarks were followed by three panels, looking at the issue of women in global health from the perspectives of women leadership, female health & cross sector (product & social) development and female health & rights.

Why does Norway, ranking second on the gender equality index, need a WGH platform?

Sidsel Roalkvam, Director of the Center for Development and Environment (SUM) at UiO discussed  the phenomenon of the all-male panel. Also called ‘manel’, it is still omnipresent, and it is time to hold institutions to account for continuing such practices. Upon commencing investigation in vaccination studies, she found herself the only woman in the room. Global Health is indeed gendered, and we should not be blind to those sectoral and policy biases. Universal health coverage discussions are about financing, quick fixes, whereas health care that adequately caters for women, including sexual and reproductive health and rights (SRHR) requires investment in health system strengthening.  Roalkvam argued to reinstate politics in global health. Camilla Stoltenberg, Director of the Norwegian Institute of Public Health, encouraged the audience to strive for change within this decade rather than within twenty years. Stoltenberg warned against complacency, underlining that gains acquired thus far can be eroded.

The role of this network is also to partner with future and existing leaders in low and middle income countries (LMICs). Women need increased visibility in order to be considered for roles as leaders, on boards, on panels. - Camilla Stoltenberg

Norway boasts several global health superstars;  Sigrun Møgedal, Grete Faremo, Camilla Stoltenberg, Cathryne Myra, Gunhild Stordalen, and Elisabeth Hoff to mention some. In the world of gender gap statistics, Norway is among the top three countries. Norway invests heavily in Global Health, yet arguably too much focus on maternal and child health and vaccines, such as Every Woman Every Child or CEPI. Does the hugely influential Statens Pensjonskasse (SPK,national pension scheme) invest sustainably in food production or urban planning? Are public health leaders sitting in the board of SPK? Dr. Mikkelsen underscored the importance of following the money and investments.

The WGH Norway platform can enable us to be transformative. Women need a place in the center of Global Health, to be shaping governance. - Bente Mikkelsen

Locally based concentration of leaders for capacity building is important.

The WGH Norway platform will showcase leadership examples both nationally and globally. Both Stoltenberg and Mikkelsen highlighted the role of the chapter in promoting and collaborating with women from low and middle income countries (LMICs).

One panel discussed obstacles to female leadership. Marie Louise Sunde, a surgeon and CEO of #HunSpanderer, highlighted that the power imbalance is inherent in the health sector. A study revealed that 22% of Norwegian female doctors have experienced sexual assault. She drew attention to unconscious gender bias in the workplace, by which opportunities and qualities are unthinkingly attributed to male colleagues. More analysis is needed on how to address gender bias in institutions and companies. This requires sex and gender disaggregated data at an organizational level.

I challenge us all to value typically feminine characteristics of being caring and collaborative as true leadership traits, and to embrace female collaboration as a means to thrive in our careers - Kristin Engvig, founder of Women International Networking

Mikkelsen called on the audience to look at the way we treat women at work. The Global Health workforce rests on paid and unpaid work, largely done by women. Ann Keeling, senior fellow at Women in Global Health questioned the assumption that women can be unpaid volunteers to close the gap in human resources for health. Ann Keeling reminded the audience of the importance of history: until the 1960’s, women in the British foreign service were forced to resign once married. She proposed that quotas for women are necessary now to address the pro-male quotas of the past. We need to question the myths, namely that ‘women are in the leadership pipeline’: yet we lose women due to burnout, harassment or structural bias.

Women need increased visibility in order to be considered for roles as leaders, on boards, on panels. This network can be used as a directory of women for such opportunities. Men are, without question, allies in addressing gender parity and a welcome part of the network. Keeling challenged the chapter to strive beyond gender parity, to instead aim for gender transformative leadership.

The Centre for Global Health would like to thank the stellar contribution of all our speakers, and give special thanks to our tireless moderator Anne Bergh, who ensured a thought-provoking and interesting debate.

Scroll through the gallery to see the photos from the launch.