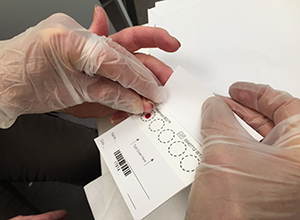 PhD student Karianne Svendsen  and her colleagues wanted to measure the effect of giving pharmacy customers a free cholesterol check. “The Big Cholesterol Check Day” was duly organized in both 2012 and 2014 in collaboration with Boots pharmacies throughout Norway and with PhD supervisors Professor Kjetil Retterstøl at the Institute of Basic Medical Sciences and Vibeke Telle-Hansen at Mills DA.

More than 10,000 individuals took the opportunity to have their cholesterol checked in the 2014 campaign, using a simple blood test involving only a finger prick. They also answered a questionnaire.

Diet affects the age of your heart

Recently, 500 of the participants, who during the 2014 checks were told they had an elevated risk of cardiovascular disease, were invited back for a one-year follow-up. This time, the researchers wanted to add an extra dimension – informing people about the age of their heart.

By measuring blood pressure, cholesterol, height and weight, researchers in the United Kingdom have discovered a method of determining how “old” your heart is. Or, in other words, to what degree the health of your heart corresponds with that of the heart in an ideally healthy body of your own age. It is natural for both cholesterol and blood pressure levels to rise as we age.

“When a 40-year-old is told he has the heart of a 50-year-old, we believe that will give him the kick-start he needs to change his lifestyle to a healthier one for the sake of his heart,” explains Svendsen.

At the next follow-up, the researchers will then be able to see whether this has had an effect on people’s dietary habits.

Pharmacies accessible to all

Another important aim of the study is to look at how pharmacies can be used as venues for health checks.'

As PhD supervisor Professor Retterstøl explains: “The local pharmacy appears to be a low-threshold venue where people can just pop in without an appointment to measure important risk factors for cardiovascular diseases. They have longer opening hours than GPs’ surgeries, and are often cheaper.”

He adds that pharmacies have many advantages that GPs’ surgeries, health clinics and hospitals do not have.

“Pharmacies as venues for health checks are a new and controversial idea, but with more than 40 million visits annually pharmacies are an important actor in the health service. This is an important project, not only to highlight the effect of screening and cardiovascular risk in general, but also to highlight the potential role of pharmacies in preventive healthcare,” says Retterstøl.

As part of Svendsen’s PhD project, Boots pharmacies have provided free checks of cholesterol, blood pressure and the long-term blood glucose level HbA1c. On the basis of the experience gained from the project, 50 pharmacies have introduced these checks as a new, permanent service, called Hjertehelse (“Heart Health”).

“I believe many people will take up this offer, even when the service is no longer free. It’s much easier simply to drop by the pharmacy rather than wait many months for an appointment, which can be the case with some GPs’ surgeries”, says Svendsen. She hopes the service will eventually be free-of-charge for all inhabitants in a given age group, as was the case with the old system of national health service screening programmes and the health check offered to all 40-year-olds.

The purpose of the project is not only to make people aware of their own health, but the data it produces will provide very valuable information about how vulnerable the average Norwegian is to risk factors for cardiovascular diseases.

The results of the first “Big Cholesterol Check” showed that more than one-third of the participants in the cholesterol screening programme in 2012 had not had their cholesterol levels measured previously. Of those with raised cholesterol, one quarter had not had it measured before.

“It’s been estimated that about 150,000 individuals have type 2 diabetes without knowing it, and tens of thousands have high cholesterol and high blood pressure. It’s not good to have a long-term, undetected high risk,” Kjetil Retterstøl emphasizes.

“Many heart attacks could be prevented”

“If more people knew what their own cholesterol levels, long-term blood glucose levels and blood pressure were, many heart attacks could be prevented. If the authorities don’t tackle the issue, it’s good that other actors step in. Free cholesterol checks in pharmacies will contribute to a very necessary debate,” says Kjetil Retterstøl.

“If more people knew what their own cholesterol levels, long-term blood glucose levels and blood pressure were, many heart attacks could be prevented. If the authorities don’t tackle the issue, it’s good that other actors step in. Free cholesterol checks in pharmacies will contribute to a very necessary debate,” says Kjetil Retterstøl.

“It doesn’t take much to reduce risk values with the right diet and physical activity. Each year, more than 1,000 people die of cardiovascular diseases before the age of 65 and many more fall ill with those diseases. It would not only prevent a catastrophe for the families involved, but also save billions in healthcare costs if more people were to become aware of their high risk values at an earlier stage, and take action to change their lifestyle in time,” adds Svendsen.

There has been a general decrease in cardiovascular diseases among Norwegians, according to figures from the Norwegian Institute of Public Health. At the same time, data  show an increase in the number of heart attacks among younger people under the age of 45. There has been as much as an 11% rise in hospital admissions for heart attacks among individuals in the 25‒44 age group between 2001 and 2009. (Sulo et al. 2014)

The campaign “The Big Cholesterol Check” was organized by Boots pharmacies in collaboration with the University of Oslo, Mills DA, the Norwegian Health Association and Grete Roede.

By Sigurd Øygarden Flæten and Karianne Svendsen
E-mail this page