A Mediterranean diet can provide many health benefits, but you may risk consuming too many environmental contaminants. Organically produced food can be the solution, a new study shows. 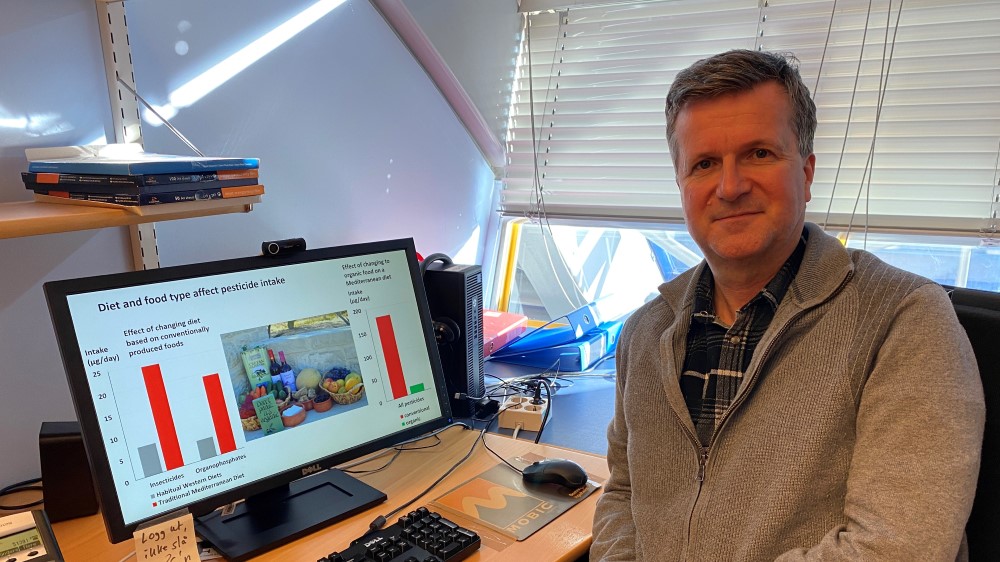 Professor Per Ole Iversen at the Department of Nutrition at the University of Oslo found that there was 90 % less environmental contaminants when eating an organically produced Mediterranean diet, compared to foods cultivated in the ordinary way. (Photo: Cecilie Bakken Høstmark, UiO)

How the study was carried out

Many people swear by a Mediterranean diet, which involves eating a lot of fruits and vegetables, whole grains, nuts, legumes and fish, along with a little wine. Another advantage is that this diet only contains small amounts of saturated fats from dairy products and red meat.

But a new study carried out by scientists at the University of Oslo and universities in other countries made a rather surprising discovery: people participating in the study who lived on a Mediterranean diet containing foods cultivated in the normal manner had two to four times the intake of different environmental contaminants compared to those eating an ordinary, North European diet.

Professor Per Ole Iversen at the Department of Nutrition at the University of Oslo has been involved in the study, together with Project Manager Carlo Leifert, who is a visiting professor at the University of Oslo. According to Iversen, one of the main strengths of the study is that it took account of several factors. The participants were divided into two groups: one ate a Mediterranean diet based on foods cultivated in the ordinary way, while the other group ate a Mediterranean diet based only on organically grown foods.

Before and after the period when they kept to a Mediterranean diet, the participants all ate their normal diet.

Environmental contaminants can affect hormones in the body

The researchers tested the participants’ urine and investigated which contaminants were present in the food they ate.

Leifert, who is an adjunct Professor at Southern Cross University in Australia and visiting professor at the Chinese Academy of Agricultural Science, reveals that several of the environmental contaminants they found are known or suspected to affect hormones in the body.

There is growing evidence that such toxins can weaken our immune defence system and perhaps also our fertility. If hormones become imbalanced, they can also have a negative effect on the growth and development of children.

– Fruits, vegetables and whole grains cultivated in the conventional way are some of the main sources of environmental contaminants absorbed through our diet. Since a Mediterranean diet is based on such foods, those eating it had a ten times higher intake of these contaminants than if their diet had been based on foods cultivated organically, explains Leifert.

Both farmed and wild fish can contain environmental contaminants, but usually in small quantities.

No warning against the Mediterranean diet

However, scientists are not yet on the point of issuing a warning against living on a Mediterranean diet devoid of organically grown foods. As Iversen makes clear, the study is not very large and they have not yet been able to monitor the long-term health effects of such a diet.

– For those who eat a non-organic Mediterranean diet, we do not yet know what will be the most decisive in the long term: consuming better and healthier nutrients than if they ate a conventional, North European diet, or absorbing a higher volume of environmental contaminants. We will have to wait for the results of research studies on larger populations, says the professor.

Our intake of environmental contaminants also comes from other sources such as the air we breathe and via cosmetics such as skin creams. This study has not adjusted its results to take account of these factors.

– But it is improbable that the two groups in our study differed with regard to the above two factors because of the way the study was designed, Iversen believes.

The UiO scientist says that for the time being, they will continue to promote the national dietary guidelines, including “five a day” and enough physical activity.

A new study of 200 pregnant women

With support from the University of Oslo and the Eckbo Foundation, Iversen and his fellow researchers will study 150 to 200 pregnant women in Norway. One group will eat organic food up until the birth of their child while the other will eat “as normal”. Both groups will be recommended to follow the national dietary guidelines for pregnant women. Iversen and his research team will then test for environmental contaminants in the participants’ blood, urine and faeces.

– We are keen to find out whether the first group eating organic food will have lower levels of environmental contaminants. We will also test the urine of the babies with this in mind. In addition, the participants will be followed up over a subsequent period of two years, says Iversen.

Crete and Norway follow the same EU regulations for organic food, with some exceptions.