Why the brain swells after liver damage - mystery solved

Liver encephalopathy is one of the diseases that claims most lives worldwide. A Norwegian study has revealed that the disease disturbs vital processes in the brain. 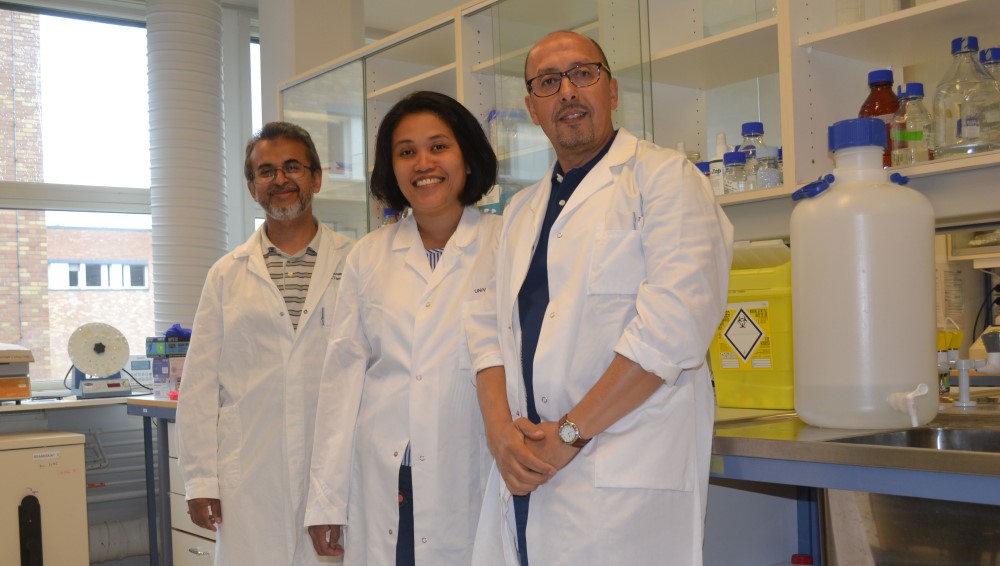 Professor Farrukh Abbas Chaudhry (at the back) and his research group has taken an important first step towards finding a cure for liver encephalopathy, or at the very least a treatment for its symptoms. Up front lead author El Hassan Hamdani, who is now working at OsloMet, in the middle Marivi Moen. (Photo: El Hassan Hamdani)

Chronic liver damage/cirrhosis is the 12th most common cause of death in the United States and in over half of the cases, those affected suffer from liver encephalopathy. In the EU, the proportion of people who contract liver encephalopathy is equivalent to the number who die due to diabetes and traffic accidents. In spite of this, little is heard about this disease.

Liver encephalopathy is first triggered by damage to the liver due to for example alcohol abuse or infections generating inflammation of the liver (hepatitis). This leads to a number of processes in the body that cause a swelling of the brain. In the end, the patient goes into a coma, with death as a possible outcome.

Development of a possible cure for liver encephalopathy

Scientists wanted to find out why brain functions are weakened and why the brain swells in acute liver encephalopathy in order to find a cure for this serious disease, or at the very least a treatment for its symptoms.

Professor Farrukh Abbas Chaudhry explains what happens before the brain begins to swell. He works at the Department of Molecular Medicine at the Institute of Basic Medical Sciences, University of Oslo.

– The liver helps us to break down many different toxins in the body. We eat a lot of proteins that are burned in the body, leaving the waste product ammonia. We also have beneficial bacteria in the gut that excrete ammonia - but ammonia is a toxic substance for the body. We therefore depend on the liver to convert the ammonia to urea, which is then excreted via the kidneys as a main component of urine, explains the professor.

If the liver fails due to alcohol misuse or hepatitis, ammonia can accumulate in the bloodstream and eventually end up in the brain.

– When this happens, patients become confused and the brain becomes swollen. Patients can change personality and become irritable and aggressive. After a while, they may become lethargic and drowsy and go into a coma. The swelling increases pressure in the skull and compresses the brain and the patient can die, says Chaudhry.

Professor Chaudhry adds that we already knew that ammonia was a key cause of disturbances in brain functions and swelling of the brain, but not why and how this happens. He and his fellow researchers therefore used a multidisciplinary approach to find out what happens to two types of cells in the brain: nerve cells and glial cells.

Nerve cells communicate with one another by means of substances called neurotransmitters, which are released from one cell in order to activate or inhibit another. The second cell can for example be given a signal to generate electric signals, change its properties or produce proteins.

Glial cells surround nerve cells and help them to function well by providing them with raw material they use to make neurotransmitters.

Cannot send messages to other cells

As part of the project, the researchers carried out experiments on mice.

The professor says that he was surprised that their findings were so clear-cut: that it is only glutamine transporting proteins in the glial cells that are affected and not the nerve cells. This causes the failure in nerve cell signals and the swelling of the brain that are both key symptoms of liver encephalopathy.

For patients who fall ill due to alcohol abuse, it can help to stop drinking.

– Up to a certain point, we can save the liver and reverse the damage caused. But eventually, this is no longer possible and the patient will then need a liver transplant. Since liver encephalopathy can also be caused by infectious hepatitis, it is important to prevent infection by means of vaccines. Drug addiction sufferers and people living in the global South who are particularly prone to various forms of infections should be vaccinated against hepatitis, says Chaudhry.

The study was conducted in collaboration with researchers at the Mossakowski Medical Research Centre PAS in Warsaw, Poland. This work was funded by the National Centre for Research (NCBiR) Polish-Norwegian Research Program (No Pol-Nor/196190/23/2013).