Professor Emeritus Bjarne Bogen received the King Olav Vs Prize for Cancer Research, from HM King Harald, at a ceremony in the University Aula on 18 October. 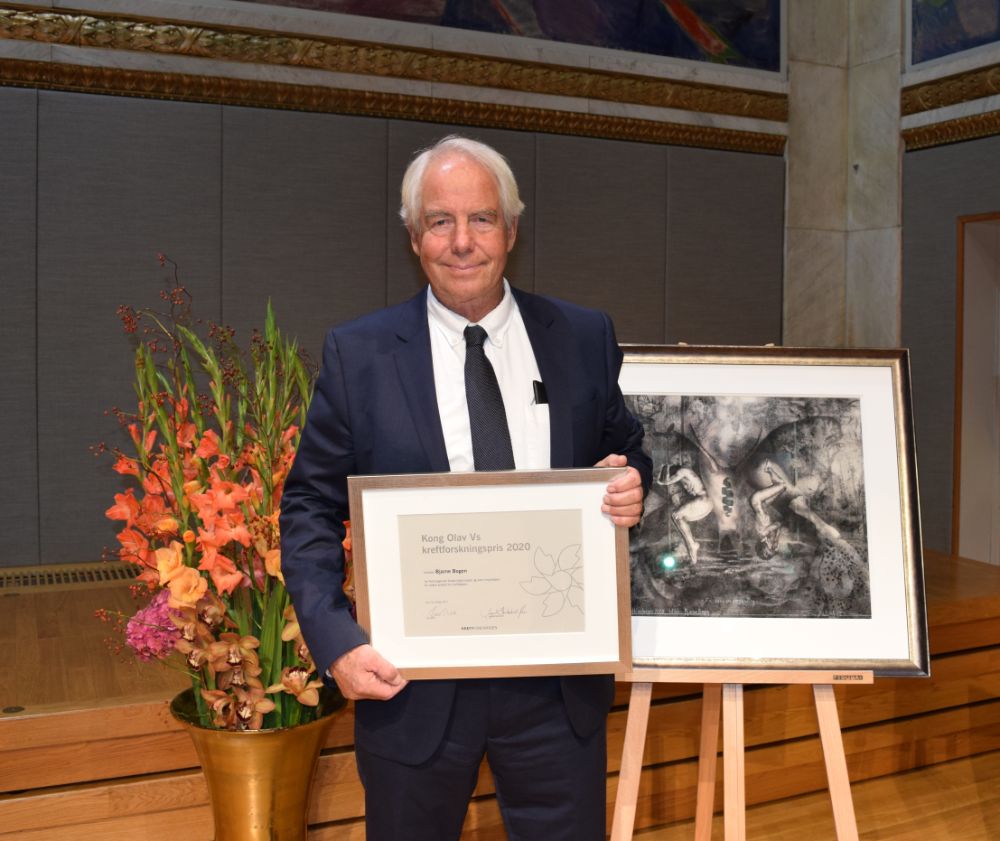 Professor Emeritus Bjarne Bogen received the award during a great ceremony in the University Aula on 18 October. The prize is one million NOK and a work of art by Tone Dietrichson. Image: Elin Doeland, UiO.

The King Olav Vs Prize for Cancer Research honours the efforts of outstanding researchers nationally and internationally. Professor Emeritus Bjarne Bogen received the prize for 2020.

The prize is awarded annually by the Norwegian Cancer Society, and handed out by HM King Harald. However, due to the COVID-19 restrictions there was no ceremony last year, and both this year and last year's prizes were handed out on 18 October.

– I was very surprised and happy when I was told that I had received the award for 2020 (…), and I am happy that the ceremony finally could take place, said Professor Emeritus Bjarne Bogen in his speech.

Head of Department Dag Kvale was present during the ceremony and said the following about the award:

– It was nice that Bjarne Bogen finally received King Olav Vs Prize for Cancer Research in the way that it should be awarded, in the Aula and with HM King Harald present. The institute once again congratulates the award-winner, and his research group, with a well-deserved prize in a field of research that is at the forefront.

– I am glad that we could finally celebrate the award with the ceremony in the Aula, he commented.

Emphasized that research matters in his speech

During his speech, Bogen told the audience about a letter that he had received from a despairing woman in 2009. She had lost loved ones to cancer, and had given up hope that researchers and doctors would ever be able to cure cancer.

– But research does move us forwards, the award-winner pointed out.

– Immunotherapy can help the immune system fighting the cancer cells, he said.

It was already in the early 1990s that Bogen and his colleagues discovered the immune cells that attack cancer cells. These cells are called T cells and are of the type CD4.

– Thanks to research, we now have immunotherapy, and today this treatment is important in addition to surgery, chemotherapy and radiotherapy, said Bogen.

Bogen developed a cancer vaccine and founded Vaccibody AS

Cancer cells can change over time, and these changes vary from patient to patient. Professor Emeritus Bogen with colleagues have developed a cancer vaccine that stimulates the T cells in the immune system to fight the altered cancer cells.

– The vaccine must be adapted to each individual patient, Bogen explained.

He founded Vaccibody AS in 2007, together with Inger Sandlie and Agnete Fredriksen. The company makes tailor-made vaccines for each individual patient.

Bogen ended the speech by saying that he wants to develop the cancer vaccines further in the years ahead, and that he hopes that cancer patients will be able to receive even better treatment.

He also thanked his staff, UiO and OUS, as well as the Institute of Clinical Medicine and the Faculty of Medicine for facilitating his work.

Professor Bjørn Tore Gjertsen from the University of Bergen received the King Olav V's Prize for Cancer Research for 2021.