MD Mohammed W.Y. Zimmo at Institute of Clinical Medicine will be defending the thesis "Exploring caesarean section in Palestine" for the degree of PhD. 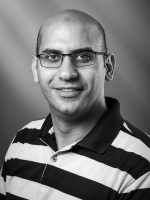 The aims of this thesis were to assess differences in use of caesarean section between six Palestinian government hospitals, to explore the impact of mothers’ characteristics as well as given reasons for caesarean section and to identify the women at higher risk of giving birth by caesarean section. The data was collected from all women giving birth in six hospitals located in different areas across Palestine from March 1st 2015 until April 30th 2017. This study, including 75000 women, is the first large scale research collaboration between Gaza and West Bank in maternal-child health.

Efforts need to be directed towards increasing the proportion of normal births after caesarean section and by reducing the number of caesarean sections in twin pregnancies and preterm Labour.