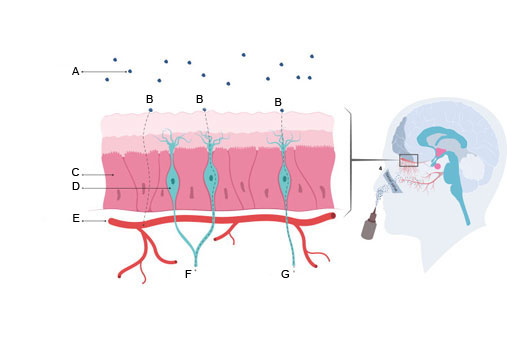 The illustration shows that oxytocin can reach the brain in two ways: either indirectly, through the blood, or directly, along nerve pathways. A: Particles from a nasal spray. B: Route. C: Mucous membrane. D: Sensory nerve cell. E: Blood vessel. F: Nerve pathway. G: Nerve.

About one out of every hundred Norwegians develop schizophrenia or autism in the course of their lifetime. Moreover, at any one time some 20 000 people are receiving treatment for these problems. Many psychiatric disorders such as autism, schizophrenia and bipolar disorder are characterised by poor social functioning.

Oxytocin is a hormone that influences social behaviour and has shown promise for the treatment of mental illness.

Researchers at UiO have now discovered that low doses of oxytocin may help patients with mental illness to better perceive social signals. As part of this project, they have collaborated with the company OptiNose, who have developed a new device designed to improve medicine delivery to the brain via the nose.

Oxytocin has historically been known to play a crucial role in child rearing as it facilitates pregnancy, birth, and the release of milk during nursing. Further, oxytocin helps regulate cardiac functions and fluid levels. More recent research has revealed the importance of oxytocin for social behaviour.

Oxytocin is a neuropeptide and was discovered in 1953. Peptides are a group of molecules that consist of a chain of amino acids. Amino acids are also known as the building blocks of proteins, which we find in all types of cells. Oxytocin is produced in the hypothalamus, which is the brain's coordinating centre for the hormone system.

Medicine through the nose

Because of oxytocin's role in social behaviour, researchers have explored the possibility of administering the hormone for the treatment of mental illness. As oxytocin is a relatively large molecule, it has trouble crossing the barrier between the brain and circulating blood. Thus, researchers have administered oxytocin to patients through the nose as this route offers a direct pathway to the brain that bypasses this barrier.

However, researchers have a poor understanding of how oxytocin reaches and affects the brain. The most effective dose for treatment has also received little research attention.

Professor Ole A. Andreassen and his research team have collaborated with OptiNose on a project that evaluated two different doses of oxytocin and on how they affect the way in which social signals are perceived.

Sixteen healthy men received two different doses of oxytocin, along with placebo. Volunteers were also given an intravenous dose of oxytocin, for a comparison of the effects of oxytocin in circulating blood. The research showed that only those administered a low dose of oxytocin experienced an effect on how they perceived social signals.

"The results show that intranasal administration, i.e. introducing oxytocin through the nose, affects the function of the brain.
As no effect was observed after intravenous treatment, this indicates that intranasally administered oxytocin travels directly to the brain, as we have long believed.
The fact that we have shown the efficacy of a low dose of oxytocin on social perception is even more important.

A dose that is lower, but that still influences behaviour, will entail a lower risk of affecting other regulatory systems in the body. Very high doses of oxytocin could, in fact, have the opposite effect on social behaviour.”

The scientists also discovered that individuals with larger nasal cavities had a stronger response to a low dose of oxytocin.

OptiNose uses a new technology to distribute medicine to the brain, making use of the user’s breath to propel medicine deep into the nasal cavity.

The device administers oxytocin high up into the patient's nasal cavity. When the medicine is targeted deep inside the nose, it enables brain delivery along nerve pathways from the uppermost part of the nasal cavity. Conventional nasal spray devices are not suited to consistently deliver medicine high up enough into the nose.

The device also expands the nasal cavity, facilitating nose-to-brain medicine delivery. As the user exhales into the device, this closes the soft palate and prevents the medicine from being lost down the throat.

Since less medicine is lost along the way, patients can take smaller doses and accordingly experience fewer side effects.

The next step in the research is to carry out the same tests on people with mental illness.

"We hope that this research project is the first step in the development of a series of new medicines that may be of great help to more people with mental illness", concludes Professor Andreassen.

The study has been published in Translational Psychiatry.