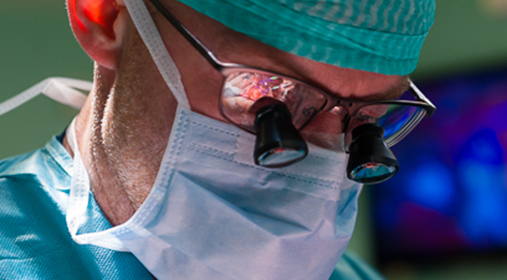 Some elderly people experience intestinal perforation as a consequence of diverticular inflammation. Medics refer to this condition as acute perforated diverticulitis and it has traditionally been treated by removing the inflamed part of the bowel.

When a new method was presented which instead involved irrigation of the peritoneal cavity and treatment with antibiotics, a number of hospitals changed their approach to what they believed to be a better solution.

The old method is still the best

A large-scale Scandinavian study now shows that the opposite is the case: while there is no clear difference in mortality between the two methods, one in five patients who received the new surgical treatment had to undergo a further operation.

Furthermore, bowel cancer was misdiagnosed as inflammation in some of the patients who took part in the trial. Surgeons using the new method failed to discover and remove the cancer during the operation; this would not have been the case had they used traditional surgical intervention.

The conclusion drawn is that the old method remains the better option for patients.

These surprising findings were recently published in the prestigious Journal of the American Medical Association (JAMA).

In 2008 a study was published which asserted that mortality among patients who received the new treatment fell from 10-20 per cent to 3 per cent. However, there were weaknesses associated with that study, according to Professor Tom Øresland.

– Specifically, the trial suffered from patient selection bias. They had most probably selected only the healthiest patients, and patients who received treatment outside of the trial were not accounted for, says Øresland.

He therefore asked himself if many opted for the new method on the basis of inadequate knowledge.

A grant awarded by the South-Eastern Norway Regional Health Authority to surgeon at Akershus University Hospital, Johannes Kurt Schultz, made it possible to conduct an in-depth study.

The outcome is something of an eye-opener and raises important questions about the development of surgical methods. In most cases there are insufficient resources available to conduct comprehensive trials before a new method is introduced.

Many new methods will therefore be widely adopted without first being adequately tested through clinical trials.

– Surgery is largely based on experience, and we have not been good enough at testing our methods and basing our choices on evidence, says Øresland.

The new study shows how important it is to prioritize proper trials whenever it is unclear whether one method is better than another.

Schultz’ study was based on the entire patient cohort available, not only the healthiest patients, who they assumed would receive the greatest benefit from the new method. The study was conducted at 21 hospitals in Norway and Sweden, which is why they secured access to such a large group of patients.

Random selection was used to decide what patients would undergo which surgical intervention. This selection was undertaken by a data server at the Norwegian University of Science and Technology to ensure that no-one could influence the process.

They also made sure that the group was representative, i.e. that more than one type of person was included. The researchers kept a record of all patients who underwent surgery, including those who did not participate in the study.

The study was monitored, which means that an independent doctor from an external hospital checked all data. If anything was found to be wrong, this was thoroughly discussed with the trial doctors. This is a method which is often used by the big pharmaceutical companies, and it is unique that a study carried out with relatively modest funding has been able to maintain such a high standard.

The hypothesis held at the start of the study was that the trial would demonstrate the superiority of the new method to the old.

Of all the patients who needed surgery for this condition in the course of the study period, 50 per cent declared themselves willing to take part in the trial.

– These are very good numbers considering the fact that we are dealing with acutely ill, elderly people who need to make a pretty quick decision, says Schultz.

The reason for the high participation rate may be that the traditional treatment remained the default treatment. Consequently, those who elected not to take part in the study would undergo traditional surgery, while the trial subjects were allocated at random to one of the two treatment methods. Participation in the trial was therefore the only way to gain access to the new surgical method.

Given the choice between having part of their bowels removed and having their peritoneal cavity irrigated, it stands to reason that patients preferred the latter.

– When conducting a test like this, it is essential that nobody knows what is the best treatment, Øresland points out.

Subjecting patients to a treatment which is suspected to be inferior would not constitute safe practice, even if it is a good principle to test whether suspicions are warranted. In this case there were indications that the new treatment might be better.

For this reason, the study was made subject to safety monitoring. Once the half-way point was reached, qualified personnel reviewed the interim results. If their work had suggested that the new method was much better, it would not have been safe to continue subjecting half the patients to a clearly inferior treatment method.

The half-way review gave no such indication.

Once the final conclusions were drawn, it was evident that the old method gave the better results.