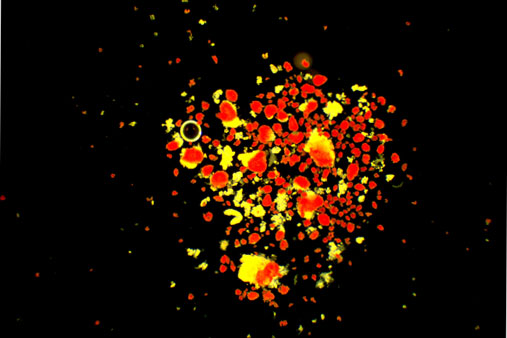 Hand-picked beta cells from the islets of Langerhans in the pancreas. Photo: Oskar Skog, Uppsala University.

Type 1 diabetes is a serious disease that affects many children and adolescents. The disease causes the pancreas to stop producing insulin, a hormone that regulates blood sugar levels.

When blood sugar levels are too high, the smallest blood vessels in the body eventually become damaged. This can lead to serious health problems further down the line, including heart attacks, stroke, blindness, kidney failure and foot amputations.

Professor Knut Dahl-Jørgensen and doctoral student Lars Krogvold are leading a research project, (DiViD), in which they want to ascertain among other things whether a virus in the pancreas might cause type 1 diabetes.

They have previously discovered viruses in hormone-producing cells, the so-called islets of Langerhans, in the pancreas. Now their research has generated some new and surprising results. 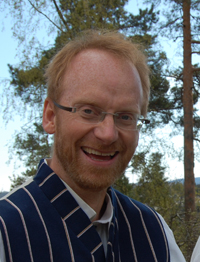 Recover the ability to produce insulin

“We found that the insulin-producing cells still have the ability to produce insulin when they are stimulated in the lab.

But what’s new is our additional discovery that the cells increased their ability to produce insulin after a few days outside the body.

Indeed, some became roughly as good at making insulin as cells from people without diabetes.

Some of the hormone-producing cells in the pancreas, the beta cells, produce insulin when they are stimulated by sugar.

Previous work has shown that you do not immediately lose your ability to produce insulin when you are first diagnosed with type 1 diabetes”.

“Our findings might mean that insulin production can be partially restored if we can find a way of stopping the disease process. The potential for insulin production is greater than previously thought. The risk of developing health problems later on is lower for those who manage to maintain a certain level of insulin production. Less supplementary insulin means that you will be better off as a patient”, says Krogvold.

The aim of the study was to determine whether beta cells still have the ability to produce insulin after the patient has been diagnosed.The researchers bathed the cells in a solution through which sugar was passed. They then measured the insulin content of this solution.

“The really exciting thing here is that insulin production increases when the cells are removed from the body and placed in an environment that is not diabetes-inducing. That your cells produce a little insulin the day after you have been diagnosed with diabetes is not unusual. What surprised us was that the cells increased their ability to produce insulin over time and that after a few days the level was approaching normal”, says Krogvold.

In the study the researchers collected tissue samples from the pancreases of living patients shortly after they had been diagnosed.

A technique called RNA sequencing was performed on cells from six living and two deceased donors. Sequencing is a way of mapping genes. The results were compared with cells from three healthy donors.

“A complete set of DNA is present inside all cells. DNA consists of a long series of genes, and those genes that the cell needs to use in a given process are read off to form an opposite strand called RNA. RNA can act as a recipe for proteins”.

This is a complicated process. When the cell realises that it needs to make a protein, structures called ribosomes read off the RNA. All of the necessary amino acids are then assembled to make a new protein, following the recipe contained within the RNA. Ribosomes are a complex of molecules and proteins that are found inside all cell types, and it is here that protein assembly occurs.

“RNA for all the genes involved in insulin production was found in the tissue samples. We interpret this as meaning that the cellular machinery for producing insulin is still intact. This was confirmed when we saw that the beta cells produced insulin”, concludes Krogvold.

The tissue samples were sent to Uppsala University Hospital, where the analyses were performed.