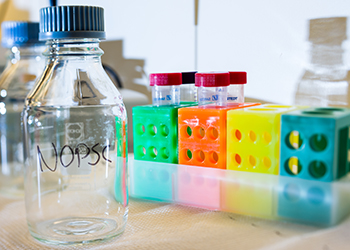 Undoubtedly, according to four consortia that have studied the genetic basis of five chronic inflammatory diseases.

Medical research has traditionally been organized in such a way that a group of experts specialize in one disease or disease mechanism. Now many are beginning to realize the benefit of taking this specialist knowledge one step further.

– We have compared data from large-scale genetic mapping studies of five chronic inflammatory diseases that often co-occur in a patient, in order to find out whether common features exist in the genetic basis of these diseases, says Tom Hemming Karlsen. He is a professor at the Institute of Clinical Medicine, and chair of the international consortium that has studied primary sclerosing cholangitis (PSC).

This type of comparative study may pave the way for new medicines and new methods of treatment.

The diseases that were studied were the joint disease ankylosing spondylitis, the skin disease psoriasis, the liver disease PSC and the bowel diseases Crohn’s disease and ulcerative colitis.

Bowel diseases were the main focus of the study. Many patients who have one of the three diseases that affect the liver, skin or joints also have an inflammatory bowel disease. Because of this, doctors and researchers assumed that there is an association. Could it be that the bowel disease causes the other illnesses?

This was the background for the researchers’ decision to perform a detailed study of the association between the diseases.

– If it is the case that these diseases have something in common, then there is also a possibility that treatment principles may be transferable from one disease to another. However, to be certain of this we must make a comparison at a molecular level, says Karlsen.

In other words, it is not enough to know that one disease resembles another, or that it often co-occurs in the same patient. These observations tell us little about which treatment might be effective for both diseases, and co-occurrence may even be coincidental.

The solution lies at what researchers call the molecular level. In this case, it means turning their attention to the genes that form the basis of the disease.

The study yielded results that both confirmed and invalidated the researchers’ assumptions. They discovered that patients share several important disease genes, but nevertheless they observed that the diseases had features that clearly distinguished them from each other. Therefore, the assumption that inflammatory bowel disease is the cause of the other diseases proves to be incorrect. In other words, it is a case of five distinct diseases, not one disease and four complications.

This knowledge forms the basis for tailoring specific drugs for the different types of inflammatory bowel disease.

Disease at a molecular level

The purpose of this large-scale comparison was to study the relationship between widespread illnesses. Armed with this knowledge, researchers can go on to develop targeted treatment for these illnesses. The study has provided the researchers with a molecular map of the diseases.

– This is a relatively new approach to disease. Researchers who work on developing treatments have increasingly begun to speak about disease and disease mechanisms more on a molecular level rather than thinking in terms of groups of diseases that are defined by symptoms and outward signs. In this manner we can more accurately find the reason for the occurrence of a particular illness, and we can develop a more precise and effective treatment, Karlsen remarks.

This type of approach is dependent on collaboration across traditional academic communities and national borders in order to obtain sufficient source data, as well as to carry out the extensive work of analyzing the data. Especially with regard to genetic studies of rare diseases such as PSC, it is necessary to collect data from several countries to obtain sufficient data to yield credible results.

– The results we have arrived at in this study form a solid platform for further research on drugs and treatment for these diseases. That is the bonus of this type of large-scale, international collaboration. More and more researchers are seeing the advantages of working in this way, and it is to the benefit of the patients, Karlsen concludes.

The study is published in the May issue of Nature Genetics and is the largest of its kind.  It includes research teams from 26 countries who together have analyzed genetic data from more than 86 000 persons from Europe and the USA.

The project has identified 244 genes that increase the risk of acquiring the diseases, and describes in detail how the diseases resemble and differ from each other at a genetic level.