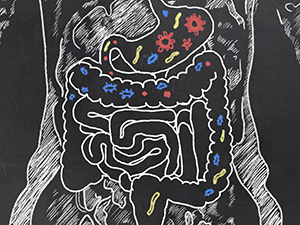 Diet, smoking and other lifestyle factors have long been known to affect the bacteria in the gut, known collectively as the gut flora. Researchers now reveal for the first time which of our genes control the composition of the gut flora. Illustration: Colourbox.no

An international group of researchers have identified a key player in the communication between gut and body. In a major study examining every gene in the body, they show that what has previously been known as the vitamin D receptor in the gut controls far more than previously thought. The findings are published in Nature Genetics.

Your gut flora consists of an entire microcosm of bacteria that is technically not part of your body. There are as many bacteria in your gut as there are cells in your body, and they help to produce a number of substances that your body cannot produce by itself.

Many think of bacteria as causing disease, and are therefore surprised to learn that we are completely dependent on billions of these tiny bacteria for our bodies to function normally. However, we know little about how the gut and the body communicate with each other.

– This is an incredibly exciting discovery that will enable anyone carrying out research on the gut to work in a more targeted way from now on, says Tom Hemming Karlsen.

He is a professor in the Institute of Clinical Medicine at the University of Oslo and a research group leader in the Division of Surgery, Inflammatory Diseases and Transplantation at Oslo University Hospital. Karlsen is one of three senior researchers leading the study.

To understand what makes us sick, we must first understand how the healthy body works. Researchers at the Norwegian PSC Research Centre and the Research Institute for Internal Medicine, along with colleagues from Bergen and various institutions in Germany, set out to uncover how the body normally communicates with the gut flora.

At the outset the researchers thought they knew the major signalling pathways between the gut flora and the body. They were therefore amazed to discover that the human vitamin D receptor gene is central to regulating the entire bacterial community in the gut.

For those working on diseases of the bile ducts, it is also interesting that the vitamin D receptor can be activated by specific bile acids that have been processed by bacteria in the gut. Moreover, it is intriguing that this receptor is activated by fatty acids that we typically think of as healthy, such as omega 3 and 6.

– The results do not prove that omega 3 and 6 are healthy, but they show that they have an effect in the gut. This is an important new avenue to pursue to find out exactly how these fatty acids affect our bodies, says Karlsen.

Genes as important as diet

It is not just what we eat that affects our gut and our health. An important goal of the study was to discover how much impact our genes have on the composition of our gut flora.

– In the last few years research has taught us a great deal about how our diet affects our gut flora, but we know little about how our genes affect it, says Martin Kummen. He carried out much of the research on which the study is based in connection with his doctorate, and is a research fellow at the Institute of Clinical Medicine and the Research Institute for Internal Medicine.

In this field too, the project has generated novel insights: our genes have as much influence on the make-up of our gut flora as the food we eat. The study shows that our diet and our genes are each responsible for about 10% of variation in the composition of the gut flora.

In addition to the vitamin D receptor, the researchers also found several other genes, including genes that have previously been shown to increase the risk of inflammatory diseases. The study shows for the first time that the pathological effects of these so-called disease genes may occur via effects on the gut flora.

– For those of us working on genetic diseases, this is important information on the path towards understanding these diseases, and ultimately developing effective treatments, concludes Kummen.

In contrast to our genes, our gut flora is readily accessible to manipulation.