Letting your baby taste foods that contain peanuts, eggs, milk and wheat from the age of three months can reduce the risk of allergies in children. 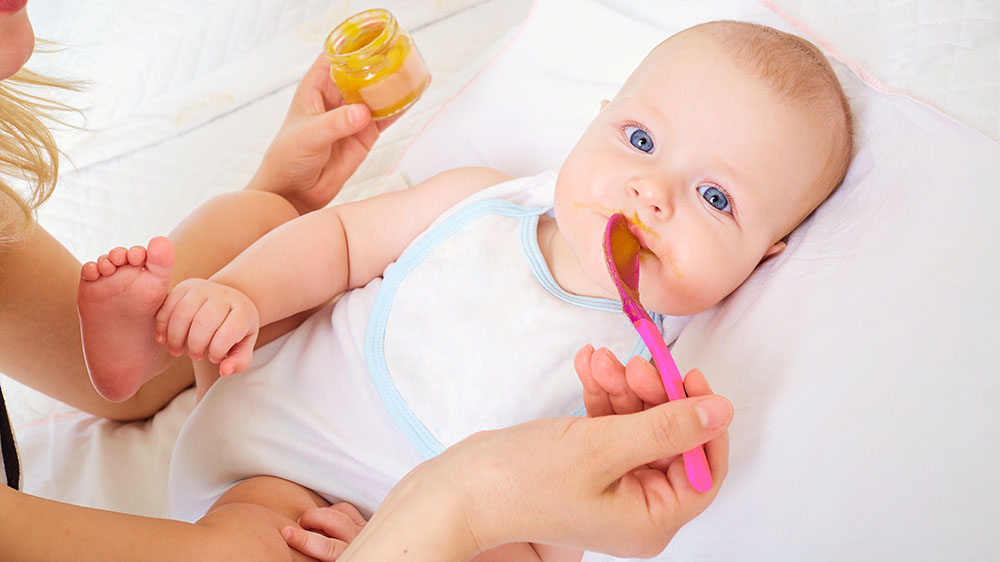 The researchers behind the PreventADALL study recommended parents to introduce one new food per week, and then continue to give the baby some of the food at least four times a week. Illustration image: Colourbox.com

Food allergies affect between 2 to 5 per cent of all children, in general, and up to 10 per cent of infants. Some of the most common allergenic foods are peanuts, eggs, milk and wheat.

A new study shows that letting infants taste these foods from the age of three months can reduce the child’s risk of developing a food allergy.

– The children who were introduced to peanuts, eggs, milk and wheat from the age of three months were less likely to have food allergies when they were three years old than the children of parents who followed the national recommendations from the Norwegian Directorate of Health, says Karin C. Lødrup Carlsen.

Carlsen is a professor at the Institute of Clinical Medicine at UiO and senior physician/paediatrician at Oslo University Hospital. She leads the PreventADALL study.

– By introducing infants to these foods early, we can reduce the prevalence of food allergies in children in a simple and safe manner, she says.

Small amounts of the foods are enough to reduce the risk

The infant merely needs to receive regular, small amounts of foods containing peanuts, eggs, milk and wheat, several times a week, to reduce the risk of food allergies, according to the new study.

– We recommended the parents to dip their finger in smooth peanut butter and let their infant taste it, and correspondingly for eggs, milk and wheat from the age of three to four months, Carlsen explains. She adds:

– For example, parents could let their infant taste soft scrambled eggs and some porridge that contains wheat.

The researchers advised parents to introduce their infant to one of the foods per week, and then continue to give the infant some of the food at least four times a week.

The goal was for the foods to become part of the child's regular diet.

It is safe and does not affect breastfeeding

According to the Professor, it is safe to give infants small amounts of food containing peanuts, eggs, milk and wheat from the age of three months.

– Available documentation shows that it is safe to start introducing children to food from the age of three months. International guidelines, last updated in 2020, indicate that it is safe and probably appropriate to start with eggs and peanuts between the ages of four and six months, she says.

In the study, the researchers also investigated whether early food introduction could affect breastfeeding.

– We are very much in favour of breastfeeding and believe that breastfeeding is the best for the health of the infant. Giving them the different foods additionally from the age of three months did not affect breastfeeding at six months of age, the Professor says.

Furthermore, both the current and previous studies show that early introduction of food is safe for children at high risk of getting severe, allergic reactions, according to Carlsen.

The foods stimulate the immune system in a natural way

When young children are introduced to different foods, the intestines usually ensure that the body learns that the foods are harmless. Little by little, the child then develops a natural tolerance for different types of food.

However, sometimes the immune system thinks that parts of the food are harmful to the body. The immune system's reaction then leads to the development of food allergies.

– We believe that early introduction of peanuts, eggs, milk and wheat is important because it trains the immune system to recognise common foods as harmless. This helps the immune system to accept these foods, which are completely normal foods that children will need throughout life, the researcher says.

For decades, parents have been advised to postpone the introduction of food to their infants. However, Professor Carlsen is concerned that this has not been good advice.

– Throughout this period, we have seen an increase in the prevalence of food allergies. The documentation for why one should postpone food introduction is quite unclear, she says, and adds:

– We cannot say for sure whether the advice to postpone has contributed to increased prevalence of allergies, but these two things have taken place at the same time.

PreventADALL is the largest and most comprehensive study in the field

In the PreventADALL-study, 2397 children were divided into four approximately equal groups. One group had no intervention, one group had to introduce the infants to peanuts, eggs, milk and wheat from the age of three months, one group used oil baths and face cream from the age of two weeks to nine months, and a group of children had both interventions.

The researchers told the parents in the control group to follow the Norwegian Directorate of Health's national guidelines. These recommend exclusive breastfeeding until the infant is six months old. They also state that infants can be introduced to food from the age of four months if needed.

The researchers followed the parents and their children until the children were three years old.

– The results were clear. The children who had been introduced to the foods when they were three months old had less allergies at the age of three than the children of parents who followed the national guidelines, says Carlsen.

The Professor believes that the Norwegian Directorate of Health should revise its national guidelines to reflect new research findings in the field.

– Available documentation points in the same direction and demonstrates that we can prevent the development of food allergies by early food introduction, Carlsen says. She adds:

– It does not work to postpone the introduction of food to infants. Now we have to think differently.

Professor Carlsen and colleagues have recently received research funding from Helse Sør-Øst and others to investigate the long-term effects of early introduction of food by assessing the children who participated in the PreventADALL study in early school age.