Congratulations to CanCell's very own Director Harald Stenmark who turns 60 this year! He was celebrated with an Anniversary Symposium at OCCI and Zoom today (23.10) honoring his illustrious career and person. 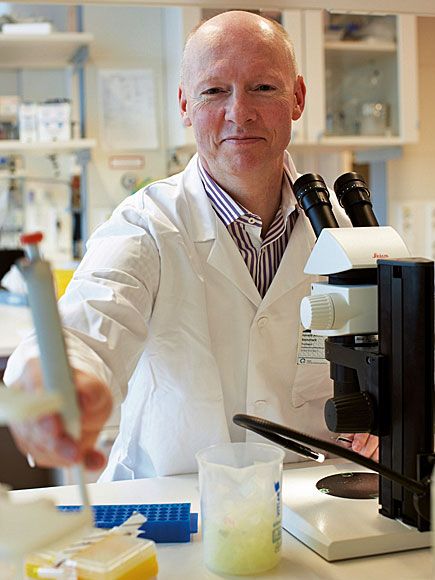 There is few that has had an impact on the cancer research in Norway as Harald Stenmark. By his researcher colleagues he is described as a hard-working scientist from the very beginning of his PhD studies. He is also described as a kind, down to earth and as a person who always plays fair. During his research career he has published or been a part of over 239 papers in large journals. With an extensive and thorough research, he has made several groundbreaking discoveries about the mechanisms that transform a cell into a cancer cell. His research group has been and are among the pioneers and leader groups when it comes to studies of ESCRT-proteins and how they interact in cellular sorting of receptors and the membrane dynamics. A hallmark of these studies is that ESCRT proteins are responsible for closing the membrane around newly formed cell cores in the end of cell division. This is by far not everything - his impressive work has led to the discovery of several tumor-suppressor genes, proteins and enzymes.

Stenmark has received several prizes during the years. Starting with the Anders Jahres Medisinske Pris which he received in 1999 for his studies of mechanisms for intracellular transport. Then he went on to receive the Radiumhospitalets Forskningspris in 2002. But this was only the start, in 2010 he received the Sir Hans Krebs Medal which is given to researchers that has achieved great achievements in molecular biology and biochemistry by the European Biochemical Societies. Other prominent scientists that have received this prize is for instance Francis Crick who discovered the alpha helix in the DNA and Richard John Roberts which won the Nobel prize in physiology or medicine in 1993. Harald Stenmark has also received Kong Olav Vs Kreftforskningspris in 2014 and is a member of Det Norske Videnskaps-Akademi, European Academy of Cancer sciences and the European Molecular biology organization. The list is almost never ending and show the big impact his work has done through the years. Therefore, we are forever thankful to have such a talented scientist as our leader and to be able to thrive and learn under your leadership. With greetings from all of us here in CanCell we congratulate you with your 60th birthday anniversary and wish you many more fruitful years filled with science and joy.