In a recent paper in Nature Cell Biology, an international team led by scientists at CanCell and the Institute of Basic Medical Sciences shows that uncontrolled repair of micronuclear membranes causes chromosome shattering associated with cancer. 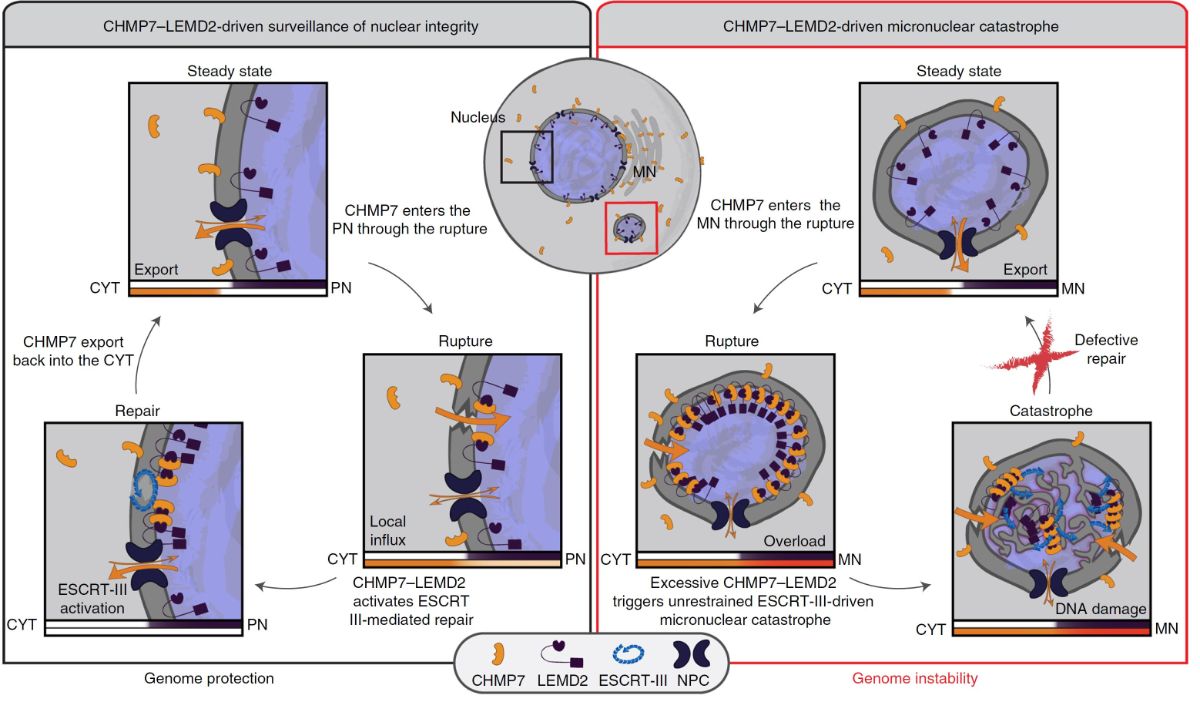 Model for ESCRT-III function at the nuclear envelope of primary nuclei and micronuclei. At ruptured micronuclei, an inherent inability to restrict CHMP7–LEMD2 causes unrestrained ESCRT-III activity along the membrane that is unable to repair the membrane and instead drives extreme membrane deformation, micronuclear catastrophe and DNA damage. CYT, cytoplasm. From Vietri et al. 2020, Nature Cell Biology ©

CanCell senior scientist Marina Vietri and her co-workers have previously identified a molecular mechanism for sealing holes in the nuclear envelope, a mechanism that involves a molecular machinery known as endosomal sorting complex required for transport (ESCRT) (Vietri et al., Nature, 2015). ESCRT-mediated sealing of holes in the nuclear envelope is required both during cell division, when new nuclear envelopes are formed, and after physical damage to the nuclear envelope. In their recent paper, the scientists show that the ESCRT machinery is also recruited to damaged micronuclei, which contain single chromosomes enclosed by a micronuclear envelope. Micronuclei are typically found in cancer cells and are thought to represent a mechanism for harnessing single chromosomes that fail to be incorporated into the nucleus. However, when the ESCRT machinery is recruited to damaged micronuclei, this does not result in their repair but instead causes massive membrane rearrangements that, probably because of physical strains, lead to chromosome fragmentation. This resembles a process known as chromothripsis, a chromosome shattering condition strongly associated with cancer progression. The reason why the membrane repair machinery goes awry at micronuclei appears to be related to accumulation of factors that recruit ESCRTs due to the small size of micronuclei with respect to primary nuclei. This causes local hyper-recruitment of the ESCRT machinery and results in distorted membranes – with catastrophic consequences for the underlying chromosome.

This work was a close collaboration between the groups of Harald Stenmark at CanCell and Coen Campsteijn at Institute of Basic Medical Sciences and also involved cytogeneticists at Oslo University Hospital and an international team of biophysicists and computational biologists. Major funding was provided by the Norwegian Cancer Society, the South-Eastern Norway Regional Health Authority and the Research Council of Norway.

You may also be interested in a presentation of the work at Institute for Basic Medical Sciences (in Norwegian).