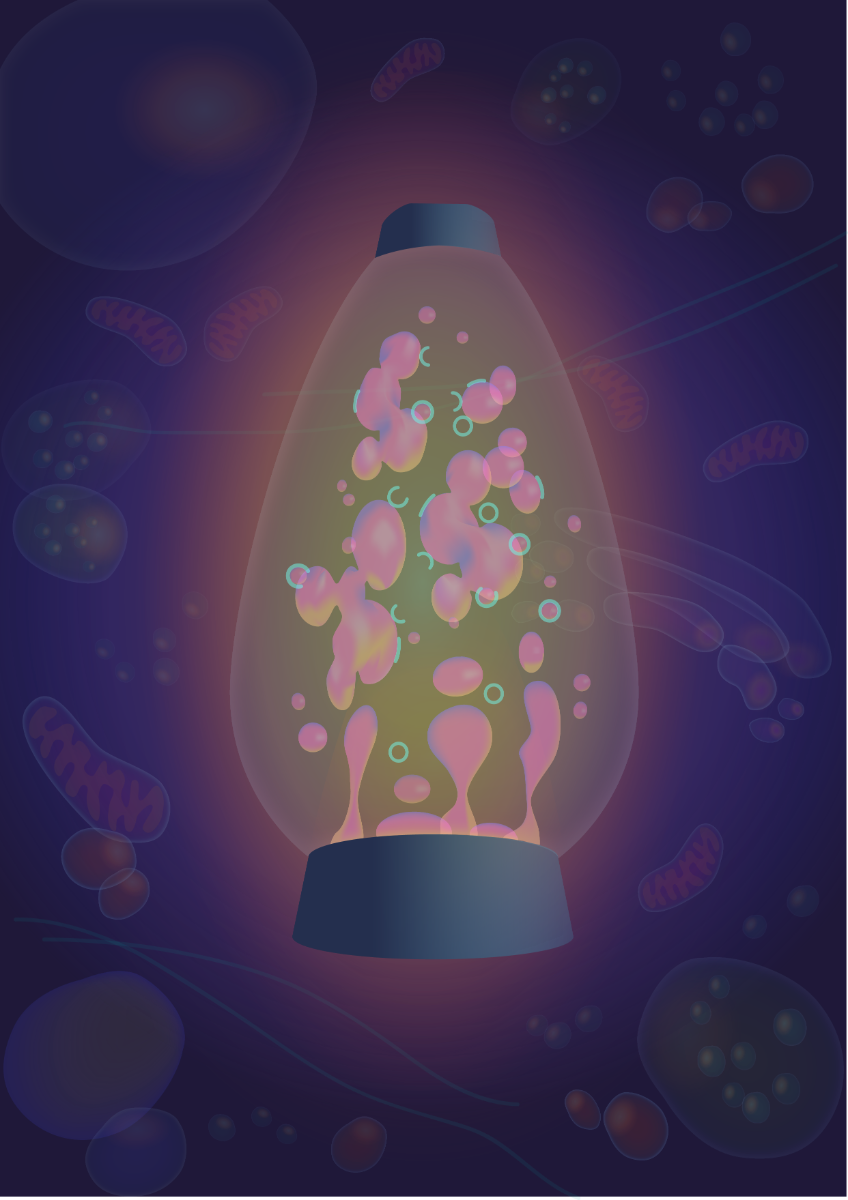 The researchers investigated how autophagy can capture fluid protein droplets and found that the shape of the droplet-phagophore pair is governed by a competition between the droplet’s resistance to deform and the tendency of the phagophore to bend. While small phagophores localized to the droplet surface, growing phagophores were observed to bite off a piece of a droplet. Even if theoretically predicted, such a trade-off between ‘piecemeal’ and ‘complete’ autophagy has not previously been observed in a cell. Beautiful movies and electron micrographs of cells as well as reconstitutions in the test tube demonstrated this trade-off and enabled the researchers to confirm the mathematical models.

Why should one care about piecemeal and complete autophagy? The “liquid” protein that the researchers used as model, called p62, is known to label cytoplasmic objects for autophagosomal degradation, and it also plays a key role in the cell´s ability to respond to metabolic stress. By understanding the rules for how this protein, in its fluid form, interacts with phagophores, it should be possible to manipulate the autophagosomal process for more efficient removal of harmful cytoplasmic objects, such as microorganisms, protein aggregates and damaged organelles. Thus, these results have implications for both infection medicine, neurodegenerative diseases, and cancer.

We have asked Sebastian Schultz a few questions about the paper.

How did you get involved in this study?

Roland and I first met at a scientific conference in Japan in 2018 where we discovered that we had a common interest. The data we independently presented there dealt with the question of how membranes are initially formed in order to selectively remove cargo from cells via autophagy. During our discussions it became clear that Roland and Jaime had developed a physical model predicting the partial turnover of cargo via membrane engulfment. Roland had also first results where he was able to simulate such behavior with isolated components in the test tube. However, such behavior had not been described in cells yet. This was very exciting as this model was able to explain a rather unexpected observation I had made several years before, but which I had left in the drawer and regarded as an 'unsuccessful' experiment.

As follow up of this initial meeting in Japan, Harald Stenmark later invited Roland to give a presentation here in Oslo. During Roland’s we decided to combine forces and to use our experimental setup to test the previously developed theoretical model. The team was completed with several colleagues in Japan that in parallel were crucial in helping to put the theoretical model to test in mouse cells.

As a cell biologist, did you find it challenging to cooperate with mathematicians and biophysicists?

I think the main challenge for such interdisciplinary cooperation lies in the fact that we speak very different, scientific languages. While mathematicians and biophysicists explain their findings using mathematical formulas and equations, we cell biologist use flowcharts indicating where and how proteins and lipids localize and interact within cells. So everybody has to make an extra effort to explain things that seem to be trivial and self-explanatory within one's own field to the others. But it also means that one has to be very honest when one does not understand something. In the beginning we had a lot of skype conversations and emails sent forth and back where we just tried to 'translate' our interpretation of the data into a common, scientific language that we all could understand. Although it still remains challenging, the feeling of excitement quickly takes over as one together reaches a new level of understanding.

Which kind of experiments did you do?

Here in Oslo, we focused on testing the physical model in human cells. For this purpose, we mainly relied on our specialty: microscopy based approaches. We employed light microscopy, which enabled us to pinpoint the cellular localization of the players under investigation and allowed us to follow processes within cells live. We also looked at thin slices of cells with electron microscopy, which allowed us to investigate the intracellular processes at much greater detail. In addition, applying both techniques on the same cells, we were able to combine the best of both worlds. We were extremely happy that our colleagues in Japan made the same observations with a partly similar and complementary approach.

For your studies, you and Simona used both wild-type and mutant p62. What was the purpose of the mutant protein?

The protein p62 is turned over by autophagy and acts as a cargo receptor, meaning that p62 can bring other substrates (cargo) along which are then degraded by autophagy. The mutant we have used in this study lacks a region that is known to be crucial for this behavior. Under normal conditions this specific region allows for the interaction of p62 with LC3, a protein that is found on autophagic membranes. Simona and I could see that this mutant indeed is not 'eaten up' by membranes via autophagy anymore. To our surprise we did see that autophagic membranes still interacted with droplets made up of mutant p62 though. However, in this case the autophagic membrane does not bite off a piece of the protein droplet but instead turns the other way and bites off a piece of the cytosol. This was another unexpected finding to us, but could be explained with the physical model and the underlying physical forces at play. In parallel, our colleagues in Japan made the same discovery by manipulating the properties of the membrane. The removal of LC3 from autophagic membranes had the same effect on turnover of p62 and bending directionality of the autophagic membrane as the mutant p62 had in our hands.

Now that this work has been published, what do you consider the most logical next steps?

Over the last years it has been shown that cells regularly assemble different droplets for all kind of biological purposes. As a consequence of droplet formation certain molecules will enrich at high concentrations within the droplets whilst other molecules will be excluded from these droplets. This allows cells to carry out special reactions. Often these droplets are referred to as 'membrane-less' organelles as their surface usually is in direct contact with the cytosol. Lately, it has been demonstrated that also membranes can interact with some of the droplets and this interaction might influence the fate of the fluid droplet and/or the membrane. However, to my knowledge, this is the first study that gives a physical explanation for such membrane-droplet interplay in cells and allows us to predict the fate of the droplet and the membrane upon interaction. Cells have to re-organize and reshape membranes all the time. Therefore, we suspect that also cellular processes other than autophagy are governed by simple physical forces upon the interaction of fluid droplets with membranes. Recent research suggests that also virus take advantage of the physical principle of fluid droplet formation under certain conditions. It will be exciting to re-address several other cellular mechanisms with our new findings at hand and to further dissect the physical and biochemical forces at play. Maybe we can use this knowledge one day to alter certain cellular mechanisms by e.g. changing the physical properties of distinct population of droplets.

Noburu MIzushima is professor at The University of Tokyo, Graduate School and Faculty of Medicine, Japan.