The overall goal of the HEIA study was to design, implement and evaluate a comprehensive school-based intervention program to promote healthy weight development among young adolescents (11-13 year olds). 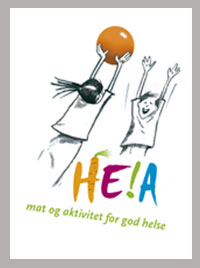 The project was conducted by researchers at the Department of Nutrition, University of Oslo, and the Norwegian School of Sport Sciences.

The study was funded by the Norwegian Research Council, and was approved by the Regional Committees for Medical Research Ethics and the Norwegian Social Science Data Service AS.

The research hypotheses to be tested in the study were:

Healthy dietary habits and physical activity reduces the risk of overweight and obesity as well as the risk of several non-communicable diseases. School-aged children are an important target group for primary prevention and health promoting activities; habits established in this period of life tend to persist into adulthood.

The intervention program was developed based on a planning model – Intervention Mapping (http://www.interventionmapping.com/), with focus on changing the following behaviours:

Further, it was assumed that these behaviours were influenced by the following potential determinants which the intervention program targeted:

The intervention program consisted of:

Funding: Through the National Association of Public Health with aid of EXTRA by the Norwegian Extra Foundation for Health and Rehabilitation

Before the intervention (data from fall 2007):