Protein in the blood did not have the function researchers believed in the interaction between two of the body's defence systems. Professor Tom Eirik Mollnes and colleagues thereby changed an established truth. 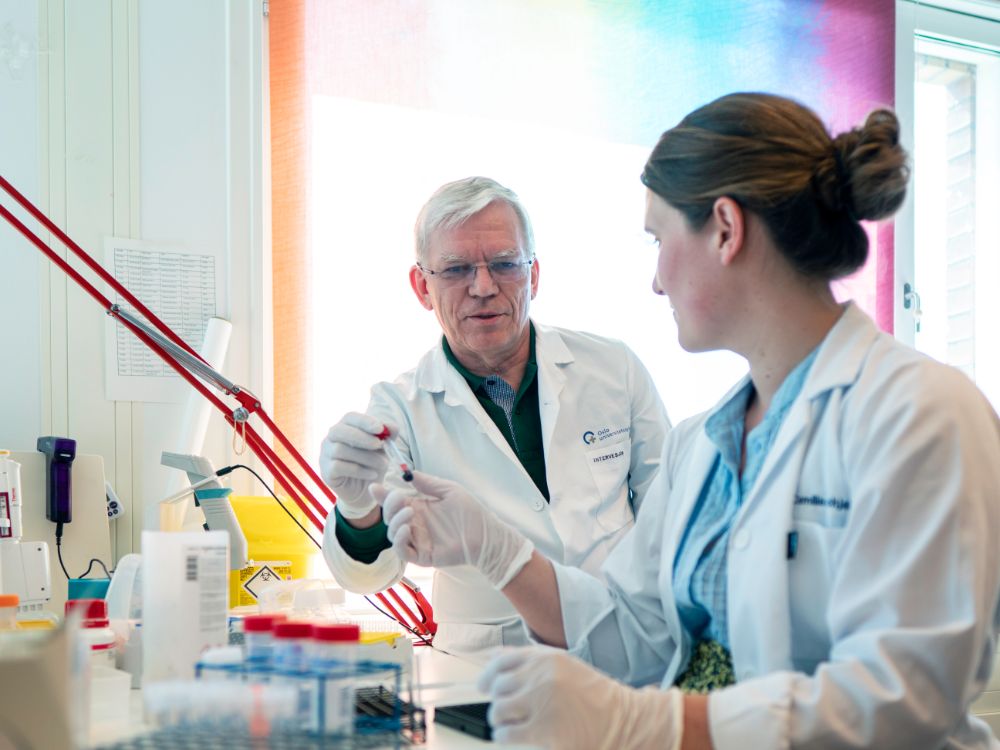 Professor Tom Eirik Mollnes leads the Complement research group at UiO and OUH. For over 20 years, the group has worked to develop a so-called whole blood model. Based on this work, they have recently disproved an established truth about the immune system. In the picture, Professor Mollnes gives senior engineer Camilla Schjalm a tube with whole blood. Image: UiO.

An established truth in the research literature means that most researchers agree that a research finding is a correct description of reality. For example, researchers today agree that the complement system, which is part of the innate immune system, plays an important role in keeping the body healthy.

But throughout history, small and large established truths have been challenged and changed.

– It has been said that an established truth in medicine lasts for about 10 years. It is probably the case that many truths last longer, but on the other hand, the time that different truths stand is constantly shrinking. This is because our perception of reality is changing rapidly, in step with new research, Tom Eirik Mollnes says.

He is Professor at the Department of Immunology at the Institute of Clinical Medicine, and leads the Complement Research Group at the University of Oslo and Oslo University Hospital.

Based on more than 20 years of work to develop a model which is called a whole blood model, Mollnes and colleagues have recently disproved an established truth about the immune system.

Doubted the methods that were used

– There was an established truth in the literature for many years that a protein in the coagulation system called thrombin could activate a protein called C5 in the complement system, the researcher says.

Mollnes and colleagues, however, doubted whether the methods used in the studies, were reliable.

– The notion that the protein thrombin could activate the protein C5 was only shown in so-called purified systems. That is, the proteins were taken out of their natural context, the professor explains.

The researchers thought that the results would possibly be different if you looked at how the proteins work in their natural environment in the blood.

For the past 5 years, Mollnes' research group has worked to further develop the whole blood model that they made 20 years ago. The new model ensures that the blood that the researchers study in the laboratory, is as similar as possible to the blood that circulates in the blood vessels in the body.

– The modified model made it possible to study the connection between the various proteins and defence systems as close to reality as possible, Mollnes explains, and continues:

– Using the new model, we clearly showed that the previous findings were incorrect. We showed that the proteins changed structure and function during the purification, and that this was the reason for the former findings.

When the proteins were in their natural environment in the blood, thrombin did not activate the protein in the complement system. Thus, the researchers had disproved the established truth.

The whole blood model can be widely used

Mollnes' study shows that you get the wrong conclusions if you do not use the right methods.

– Many findings have been published in purified systems that are not representative of reality, says the professor, and adds:

– You can say that Gro Harlem Brundtland's statement that "everything is connected to everything" is a very good description of how biology and the human body work. Therefore, it is important to use methods that make it possible to look at how different systems in the body interact and cooperate.

Mollnes and the Complement group’s whole blood model makes such methods possible, and the model can be used widely. The whole blood model can, by and large, be used to study all the substances and biological systems in the blood.

Professor Mollnes therefore considers the model to have great potential.

– With the whole blood model, we have contributed to something that we will not only benefit from in our own laboratory, but that can be an asset to research groups in a number of fields, he says.

Worked against the current for several years

It takes time to develop new models, and Professor Mollnes and his research group were working against the current for several years.

Even so, Mollnes and his colleagues have now received recognition for their work from the research community. The article was especially recommended by the editors of The Journal of Immunology as a ‘Top Reads Selection’.

– Changing so-called established truths is not easy, and we had to go through many rounds, with a number of experiments, to gain acceptance for our findings. That is why our work was especially recognized, the professor concludes.