Biological membranes deform to generate a vesicle within a vesicle. This phenomenon, called intraluminal vesicle formation, is a crucial step in the cellular clearance of obsolete transmembrane proteins, such as for example growth factor receptors. When this mechanism fails, cells can divide uncontrolled and cancer can arise. 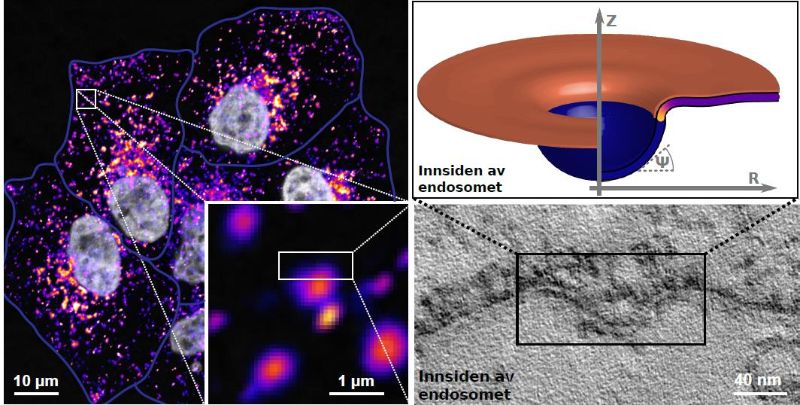 The picture on the left shows a fluorescence microscopy picture of a group of cells. The cell membranes are indicated with a blue outline, the nuclei are shown in white and the round structures are endosomes labeled with an antibody. Fluorescence microscopy allows to measure protein concentrations and their changes over time. To visualize the shapes of endosomal membranes, electron microscopy is necessary (picture to the lower right). Combining the microscopic information in a mathematical modeling allowed the authors to understand the biophysical basis of membrane deformation in the cancer-relevant cell biological process of intraluminal vesicle formation.

Now, an interdisciplinary team involving the groups of Harald Stenmark, Institute for Cancer research and Centre for Cancer Cell Reprogramming and Andreas Carlson from the Department of Mathematics, UiO, has unraveled how the ESCRT machinery bends membranes.

By combining cell biological analyses and mathematical modelling, the teams could show that the membrane bends due to the crowding of the ESCRT proteins and transmembrane cargo and that this process can occur without the requirement for energy in the form of ATP hydrolysis.

From the Stenmark team, cell biologists Eva Wenzel and Camilla Raiborg provided quantitative fluorescence microscopy data of endosomes, which were filmed in living cells. In collaboration with the Unit of Cellular Electron Microscopy (UCEM), headed by Andreas Brech, electron microscopy data allowed measurements on sizes and shapes of forming intraluminal vesicles. These combined microscopic biological data were used by biophysicist Susanne Liese in Andreas Carlson’s group to establish a mathematical model based on energy minimization of elastic surfaces in conjunction with attached protein complexes. The Stenmark team could then verify the predictions from the mathematical model experimentally by using cell biological methods and quantitative electron microscopy. An article summarizing the findings was published 2nd of November in the prestigious journal PNAS (Proceedings of the National Academy of Sciences of the United States of America).

The article in PNAS:

The previous article in Nature Communications which formed the basis for the current follow-up study: