Cand.med. Jesper Brandstorp-Boesen at Institute of Clinical Medicine will be defending the thesis "Squamous cell carcinoma of the larynx with emphasis on the changes in demography, stage, treatment, recurrence and survival for the period 1983-2010" for the degree of PhD. 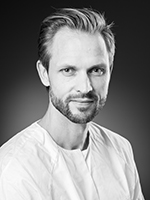 Laryngeal cancer (LC) is the most frequent head and neck cancer in Norway. Patients with early stage LC are associated with a favorable outcome, but the results for advanced stage LC have shown limited progress. Novel treatment modalities have been introduced the last three decades. Ideally, the modality of treatment should be curative but also preserve the laryngeal functions, without compromising survival. However, selecting the appropriate management remains a clinical challenge.

The results of this thesis are based on three retrospective, longitudinal cohort studies of 1616 patients treated for LC, at Oslo University Hospital, Rikshospitalet during 1983–2010. The development in demography, disease stage, modality of primary treatment, risk factors of recurrent disease and its prognostic impact on survival rates among LC patients are presented.

We found a significant increase in the proportion of female LC patients and females presented with supraglottic LC more frequently than male patients. Disease stage at diagnosis was strongly related to subsite. T1 LC increased significantly, as a result of an increase in glottic T1a LC. Transoral lasermicrosurgery replaced radiotherapy as first-line treatment for early stage glottic LC, whereas advanced stage LC increasingly was managed non-surgically. Most LC recurrences developed locally and within three years follow-up in all subsites. The risk of recurrence was unfavorably associated with supraglottic LC, treatment in the first half of the study, lower age and intermediate T2/T3 LC. Modality of treatment showed no significant impact on the risk of recurrence in neither subsite. Early stage glottic LC display excellent survival rates. T-status and primary surgical management was essential for survival among glottic LC, whereas survival among supraglottic LC was disadvantageous regardless of T-status and modality of treatment.