Cand.med. Martin Bogale Ystgaard at Institute of Clinical Medicine will be defending the thesis "Innate immune response in neonatal hypoxic-ischemic brain injury" for the degree of PhD. 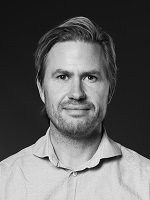 Chair of the defence

Hypoxic-ischemic brain injury is a major contributor to neonatal mortality and morbidity. After such insults, the innate immune system responds swiftly and is central in the pathogenesis. A well balanced immune response is necessary to reduce the impact and resolve damaged tissue. However, an under or over stimulated response can potentially worsen the outcome.

Furthermore we investigated the role of a newly developed anti-inflammatory drug, N-acetylcysteine amide (NACA), in a piglet model of neonatal hypoxic-ischemic brain injury. Piglets treated with NACA showed reduced levels of IL-1β and a steeper decline in tumor necrosis factor-α. There were however no significant difference in brain injury following NACA treatment.

We conclude that deficiency of central components of the innate immune system can both aggravate injury such as NLRP3 deficiency, and on the other hand ameliorate injury, such as ASC deficiency following neonatal hypoxic-ischemic brain injury. NACA can serve a potential neuroprotective role by dampening the inflammatory response.